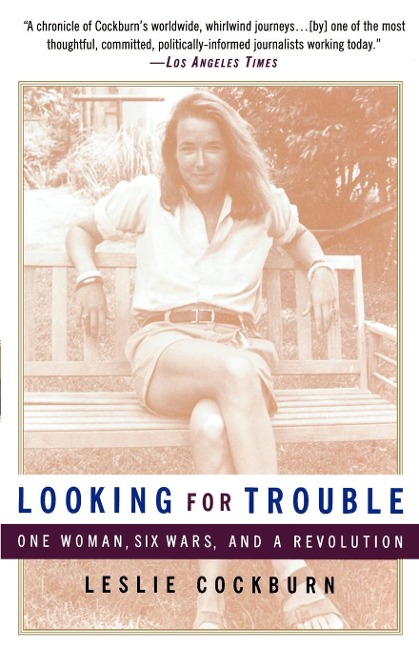 One Woman, Six Wars and a Revolution

Leslie Cockburn has dined with the Cali Cartel, marched with the Khmer Rouge, hunted down the Black Turban in Afghanistan, pursued the Russian mafia to the Arctic Circle, shared pomegranate sauce with the ayatollahs, and stopped a small Kurdish war, but she has never told these stories in a book...until now. Cockburn was one of the first women to break into the tight fraternity of combat and Third World reporters when she began work at NBC News in 1976. By the time she moved to "60 Minutes", Cockburn had interviewed Muammar Qaddafi and Margaret Thatcher, been arrested as a spy in Gambia, and effectively eliminated whatever doubts her colleagues might have had about a woman's ability to tackle the news business's most dangerous assignments.
With a cast of generals, drug lords, rock stars, and kings, "Looking For Trouble" is the incredible story of a career that has spanned the history-making news events of the last two decades.

Leslie Cockburn's coverage of foreign affairs has won her numerous awards, including Emmy, George Polk, and duPont-Columbia Awards; the Robert F. Kennedy Award for International Reporting; and the National Press Club Award for Diplomatic Correspondence. Cockburn is the author of One Point Safe, the True Story of Russian Nuclear Security, Dangerous Liaison: The Inside Story of the U.S.-Israeli Covert Relationship, and Looking for Trouble: One Woman, Six Wars and a Revolution.