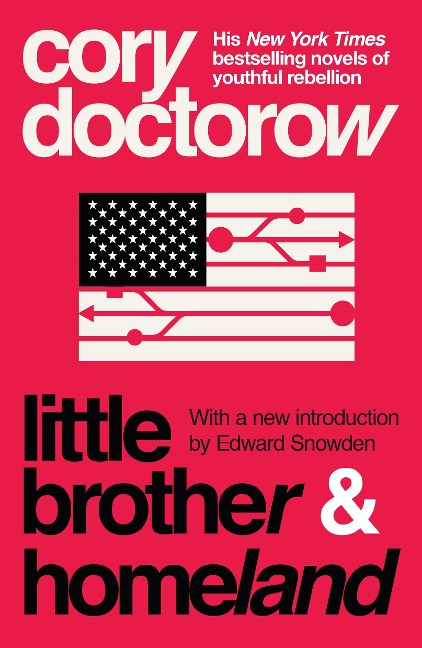 "A wonderful, important book ... I'd recommend Little Brother over pretty much
any book I've read this year." -Neil Gaiman

Little Brother
Marcus Yallow is seventeen years old when he skips school and finds himself caught in the aftermath of a terrorist attack on San Francisco. In the wrong place at the wrong time, Marcus and his friends are apprehended by the Department of Homeland Security and whisked away to a secret prison where they are brutally interrogated for days.

When the DHS finally releases them, Marcus discovers that his city has become a police state. He knows that no one will believe him, which leaves him one option: to take down the DHS himself. Can one brilliant teenage hacker actually fight back? Maybe, but only if he's very careful...and if he chooses his friends well.

Homeland
A few years after the events of Little Brother, California's economy collapses and Marcus finds himself employed by a crusading politician who promises reform. Then his former nemesis, Masha, emerges with a thumbdrive containing WikiLeaks-style evidence of government wrongdoing. When Marcus witnesses Masha's kidnapping by the same agents who detained and tortured him earlier, he has to decide whether to save her or leak the archive that will cost his employer the election and put thousands at risk.

Surrounded by friends who consider him a hacker hero, stalked by people who look like they're used to inflicting pain, Marcus has to act, and act fast.

"As dead serious as Nineteen Eighty-Four, as potentially important a 'novel of ideas,' with a much more engaging central character and an apparently inexhaustible supply of information on everything from brewing coffee to sneaky surveillance and how to defeat it." -The Wall Street Journal on Homeland

If You Could See Me Now

The Sun and Her Flowers