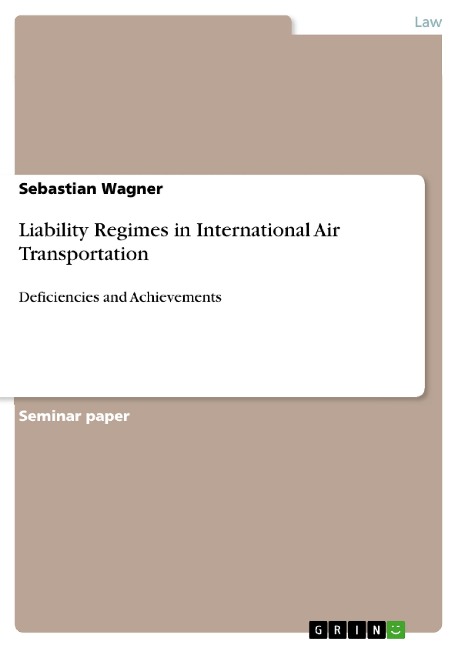 Seminar paper from the year 2013 in the subject Law - Miscellaneous, grade: 1,0, University of Applied Sciences Wildau (Wildau Institute of Technology), course: Aviation Management - The Law of International Carriage by Air, language: English, abstract: The invention of aircraft is a magnificent piece of technology, which is a result of a long pro-cess of human effort. With the use aircraft for military purposes during World War I it was shown that aviation had great potential even in time of peace. The essential role of aviation industry in everyone's life does not need any further explanation. Today's generations and those of the future have a quite natural interest in its development and safety. While flying offers various opportunities to mankind, at the same time, it is still a risky activity and acci-dents can be absolutely devastating. Even if aviation stands for one of the safest modes of transport, incidents will occur and people and airfreight will get damaged. The mentioned facts and the growing number and use of aircraft called for some kind of international regu-lation of aviation since from the very beginning (McNair 1964, p. 9).
In general aviation is a global business, which creates a need for international common rules. Over the years there have been quite many attempts to hold an international convention on the area. It was from upmost importance to create an adequate and uniform compensation system for the passengers and cargo but at the same to protect the infant aviation industry (Paulsson 2009, p. 6).

The subject of this paper is the regime of passenger liability in private international air law. This regime of liability is based on two global legal systems, represented by the ageing Warsaw System created from 1929 and the new Montreal Convention of 1999. The historical development and explanation of both systems, including their amendments and supplemen-tary instruments, acts as basis for this project paper.
In a second step I am going to deduce the necessities for the creation of the Montreal Con-vention. Then I will go into detail of its achievements and deficiencies concerning passenger liability in private international air law.
Finally the paper is closing with a short summery of the development of the general and in particular the legal liability issues of both main Conventions.

Sebastian Wagner, Master of Aviation Management, was born and raised in Germany. He studied at universities in Munich, Berlin and Austin/Texas where he successfully completed his degrees in Economics, Business Administration and Aviation Management. His specialist area of experience and knowledge is airport and airline management as well as human resources.
He is also an experienced military air traffic controller, leader and lecturer. Until today Sebastian Wagner has published various aviation and marketing related publications.