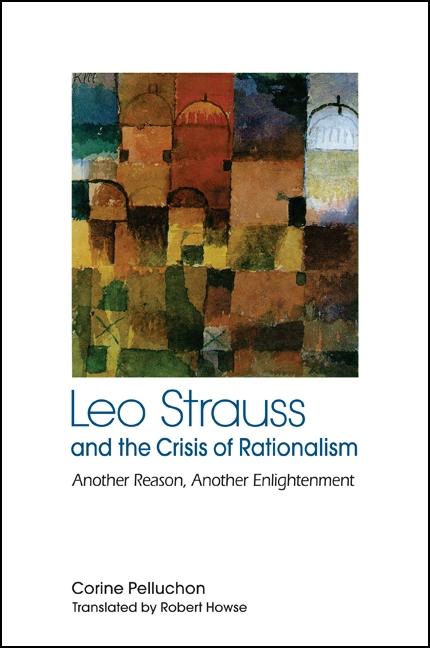 Leo Strauss and the Crisis of Rationalism

Another Reason, Another Enlightenment

How can Leo Strauss's critique of modernity and his return to tradition, especially Maimonides, help us to save democracy from its inner dangers? In this book, Corine Pelluchon examines Strauss's provocative claim that the conception of man and reason in the thought of the Enlightenment is self-destructive and leads to a new tyranny. Writing in a direct and lucid style, Pelluchon avoids the polemics that have characterized recent debates concerning the links between Strauss and neoconservatives, particularly concerns over Strauss's relation to the extreme right in Germany. Instead she aims to demystify the origins of Strauss's thought and present his relationship to German and Jewish thought in the early twentieth century in a manner accessible not just to the small circles devoted to the study of Strauss, but to a larger public. Strauss's critique of modernity is, she argues, constructive; he neither condemns modernity as a whole nor does he desire a retreat back to the Ancients, where slaves existed and women were not considered citizens. The question is to know whether we can learn something from the Ancients and from Maimonides-and not merely about them.

Corine Pelluchon is Full Professor in Philosophy at the University of Franche-Comté in France. In addition to her book on Leo Strauss, which was awarded the François Furet Prize in 2006, she has written several other books. Robert Howse is Lloyd C. Nelson Professor of International Law at New York University School of Law and the author of Leo Strauss: Man of Peace.

Part I. The Dissection of the Modern Religious Consciousness

Introduction: The Perplexity of the Modern Religious Consciousness

1. Enlightenment and Anti-Enlightenment
The Jacobi Question
The Pantheism Debate
The Critique of Natural Religion
There Is No Such Thing as Moderate Enlightenment
The Rejection of the Kantian Solution
The Controversy over the French Revolution
The Crisis of the Tradition
The Science of Judaism and the Dialectic of Assimilation
The Discontinuity of the Ancients and Moderns
The Aporias of Zionism

3. The Return to the Tradition
Rationalism and Mysticism
Allegory and Symbol
Reason and Experience
The Human Experience of the Absolute
Religion and Philosophy
Ethics and Spirituality
Redemption and Politics
The Jewish Enlightenment of Maimonides
Cohen and Strauss
From Morality to Politics
The Rational Critique of Reason

1. The First Wave of Modernity
Machiavelli, the Originator of the Modern Enlightenment
The End of the Renaissance Humanist Ideal
Power, the Mastery of Men, and the Mastery of Nature
Philosophy, Propaganda, and Barbarism
Hobbes or the Founding of the Modern State
Political Science
Vanity and Fear
Individualism, Liberalism, and Absolutism
From War to Commerce
The Crisis of Liberalism: The Dialogue between Strauss and Schmitt
From the Rechtsstaat to the Total State in the Era of Technology
War and the Affirmation of the Political
Decisionism and Political Philosophy
Resoluteness in Heidegger

2. The Second and Third Waves of Modernity
The Rousseauian Movement
The Paradoxes of Rousseau
Society and the Rich
Revolution, and History, and the General Will
Modern Tyranny, Marxism, and Capitalism
The Dialogue between Strauss and Kojeve
Philosophy and Politics
Locke's Liberalism
The Contemporary Form of Tyranny
Nihilism according to Nietzsche and after Nietzsche
The Repetition of Antiquity at the Peak of Modernity
The Law as Denaturing and the Religious Atheism of Nietzsche
The Radicalism of the Straussian Critique of Christianity

Conclusion: The Straussian Enlightenment
Strauss's Radical Questioning
From Jacobi to Maimonides: Neither Kant nor Hegel
This Is Not an Ethics
Strauss's Legacy