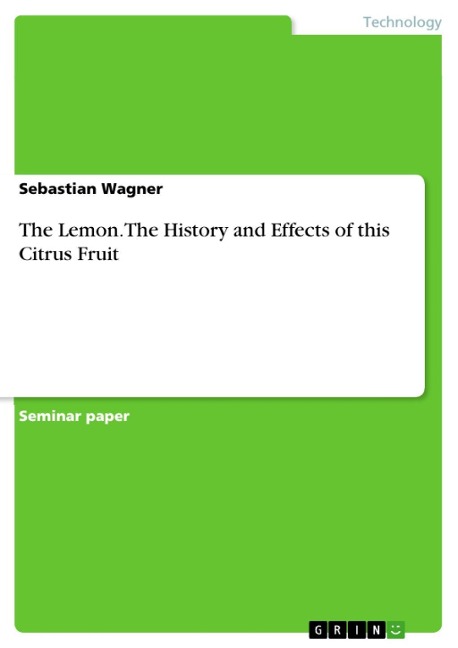 Seminar paper from the year 2002 in the subject Food Technology, grade: B+, César Ritz Colleges (Hotel Management School), 15 entries in the bibliography, language: English, abstract: It is not very clear where the lemon has its origin. Citrus fruits have been cultivated in southern China and Southeast Asia for approximately 4000 years (apparently a lemon-shaped earring was found in the Indus-valley dating back to 2500 BC). Between 400 and 600 BC the lemon (the scientific name of the tree is Citrus lemon) was introduced into the Middle East, one can find old Oriental stories where this fruit is mentioned. It were Arab traders in Asia who brought then around AD100 and 700 citrus fruits into Eastern Africa and the Middle East, after that they planted lemons in the Sahara, Andalusia and Sicily, bringing the lemon to Southern Europe during their occupation of Spain (in Pompeii a mosaic was found showing a lemon, but botanists argue that it became popular first in the Middle Ages probably through crusaders).

Christopher Columbus carried the fruit then into the new discovered continent, known as America, where it spread rapidly. Portuguese traders came back to Europe with new varieties from Southeast Asia in the 16th century. 2 centuries later then, citrus fruits had been distributed and known all over the world. In the 1890s physicians discovered that drinking juice of citrus fruits could cure scurvy, a vitamin deficiency disease. Further efforts by scientists resulted in the knowledge that this juice had positive effects because of its high vitamin C content. Furthermore there are other substances present such as vitamin A, vitamin B and some other minerals beneficial for the human body. People used lemons for flavouring foods and drinks, bleaching printings on cotton, production of perfume as well as medicine. Even before that lemons were used, for example the ladies of Louis XIV`s court reddened their lips with lemons or to express wealth. All these new discoveries of the positive effects of lemons made the fruit popular. Today about 25% of the world's lemon production is raised in the United States, mostly in southern and central California (the earliest lemon-record in America is from 1493 in Haiti when Columbus arrived).
[...]