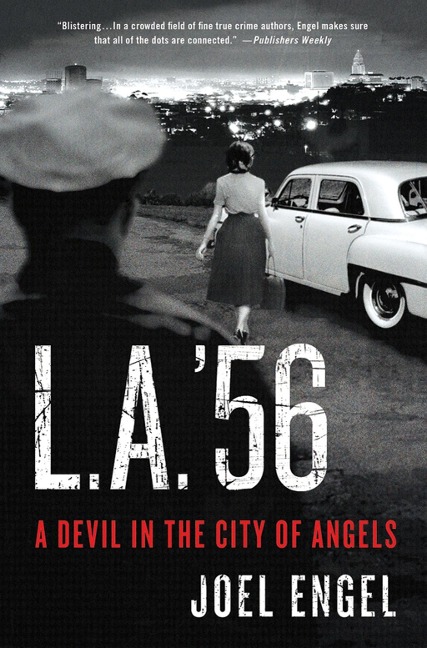 A Devil in the City of Angels

Los Angeles, 1956. Glamorous. Prosperous. The place to see and be seen. But beneath the shiny exterior beats a dark heart. For when the sun goes down, L.A. becomes the noir city of James Ellroy's L.A. Confidential or Walter Mosley's Easy Rawlins novels. Segregation is the unwritten law of the land. The growing black population is expected to keep to South Central. The white cops are encouraged to deal out harsh street justice. In L.A. '56, Joel Engel paints a tense, moody portrait of the city as a devil weaves his way through the shadows.

While R&B and hot jazz spill out of record shops and clubs and all-night burger stands, Willie Fields cruises past in his dark green DeSoto, looking for a woman on whom he can bestow the gift of his company. His brilliant idea: Buy a tin badge in the five-and-ten to go along with his big flashlight and Luger and pretend to be an undercover vice cop. The young white girls doing it with their boyfriends in the lovers' lanes dotting the L.A. hills would never say no to a cop. Into the car they go for a ride downtown on a "morals charge," before he kicks out the young man in the middle of nowhere and takes the girl for a ride she'll spend a lifetime trying to forget.

There's a bad guy on the loose in the City of Angels.

Enter Detective Danny Galindo-he'd worked the Black Dahlia case back in '47 as a rookie. The suave Latino-one of the few in the department-is able to move easily among the white detectives. Maybe it's all those stories he's sold to Jack Webb for Dragnet. When Todd Roark, a black ex-cop, is arrested, Galindo knows he's innocent. But there's no sympathy for Roark among the white cops on the LAPD; Galindo will have to go it alone.

There's only one problem: The victims aren't coming forward. The white press ignores the story, too, making Galindo's job that much more difficult. And now he's fallen in love with one of the rapist's first victims. If he's ever found out, he can kiss his badge good-bye.

With his back up against a wall, Galindo realizes that it will take some good old-fashioned Hollywood magic to take down a devil in the City of Angels.