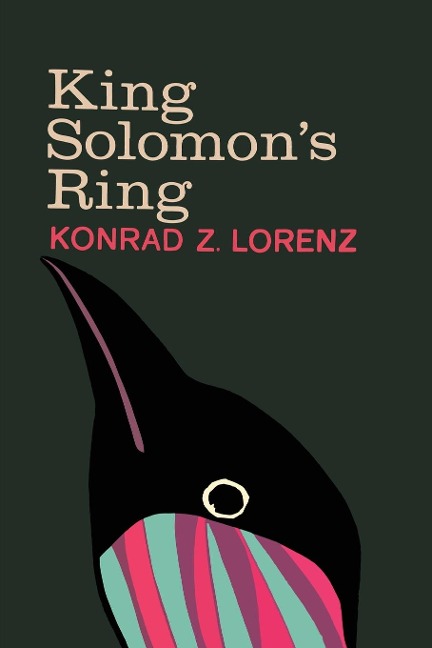 2020 Reprint of the 1952 Edition.  Exact facsimile of the original edition and not reproduced with Optical Recognition Software.  The book's title refers to the legendary Seal of Solomon, a ring that supposedly gave King Solomon the power to speak to animals.  Lorenz claims that he likewise achieved this feat of communication with several species. He accomplished this by raising them in and around his home and observing their behavior. King Solomon's Ring describes the methods of his investigation, and his resulting findings about animal psychology. Lorenz's findings include the surprisingly refined social system of the common Eurasian jackdaw, the uncanny behavior and bodily features of the tiny water shrew, and the surprisingly complex interactions of seemingly unintelligent aquarium fish. He interlards his narrative with anecdotes based on his unusual methods, without which he could not have made many of his observations.
King Solomon's Ring dispels several common misconceptions about animals' intelligence, but at the same time points out many of their similarities with humans, although some of these similarities come from speculative extrapolations (in fact, Lorenz has been criticized for excessive anthropomorphism). King Solomon's Ring also addresses the issue of keeping pets. Lorenz praises the benefits that a pet owner derives from his pet, however, he also describes the hazards that an animal can pose to the inhabitants and material contents of a house, and the ways in which a pet's captivity can make it miserable, and explains how to avoid each of these causes for discontent.  A few of the findings it presents have found their way into common knowledge since its publication, such as the phenomenon of imprinting.
'It is one of the best and most penetrating non-technical books about animals and animal nature that has ever been written ... every sensitive reader will agree that the book is a work of humanity, wisdom and balance as well as of delightful humour.' - W H Thorpe
Contents: Animals as a nuisance -- Something that does no danage : the aquarium -- Robbery in the aquarium -- Poor fish -- Laughing at animals -- Pitying animals -- Buying animals -- The language of animals -- The taming of the shrew -- The covenant -- The perennial retainers -- Morals and weapons.