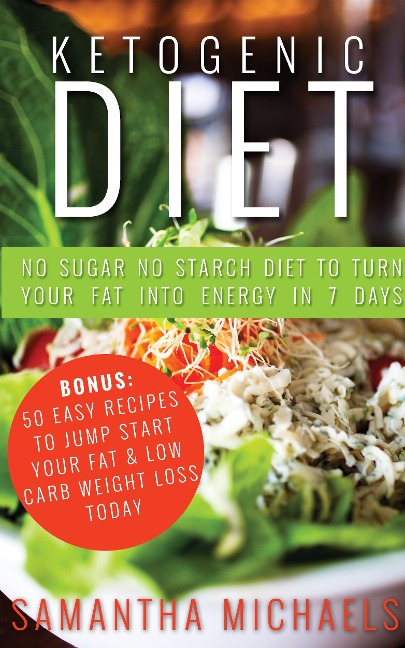 Diet, by definition, is the type of food consumed in a certain period. It can be as simple as an average daily meal. It can also be part of a treatment program for medical conditions. The ketogenic diet has long been used in the treatment of epilepsy in children. Recent findings showed that it has other benefits aside from controlling seizures. Since its introduction in the 1920s, the ketogenic diet remains controversial until today. How can seizures and other neurological disorders be controlled with a simple diet? The exact mechanism may not be known but the results of years of research are staggering. Several other benefits are also found with the ketogenic diet. One of which is for weight loss. Burn fat by eating more fat is what they say. That is the running version of weight loss programs that incorporate a ketogenic diet. In this book, Ketogenic Diet: No Sugar No Starch Diet To Turn Your Fat Into Energy In 7 Days (Bonus : 50 Easy Recipes To Jump Start Your Fat & Low Carb Weight Loss Today),learn more about ketogenic diet today. Read about its original purpose and the many other benefits that has stemmed from the many research done on ketogenic diet.

Samantha Michaels has written on a myriad of topics which have all sold quite successfully and now she has opted to focus on preparing great information on various important diets in the marketplace. Samantha is aware that the numerous diets create confusion among consumers and is striving to boil down the essence of each diet to its core principles and educate readers of the pros and cons of each diet. Each book will detail the key features of the diet and how the reader can implement them in their real life in order to achieve their weight loss aspiration