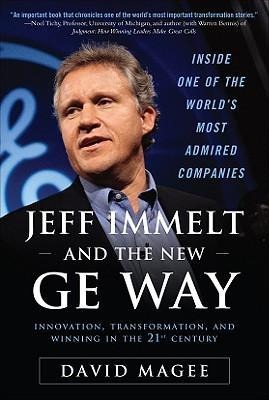 Jeff Immelt and the New GE Way: Innovation, Transformation and Winning in the 21st Century

When it was announced in late 2000 that Jeff Immelt would be taking the helm of GE, some skeptics were quick to voice their reservations about the future of the company after Jack Welch. Not only were Welch's shoes particularly large ones to fill, but the economy was dallying with recession, China and India were taking their first giant steps into the global economy, and just four days into Immelt's tenure came the biggest game changer of all: 9/11.

The hand-wringing, it turned out, was all for nought. During Immelt's first seven years on the job, GE's revenues increased by more than 60%, its profits doubled, and the company solidified its status as the world leader in technological innovation.

Written with the full cooperation of Immelt and GE senior executives, Jeff Immelt and the New GE Way tells the amazing story of how Immelt defied the skeptics and successfully reengineered one of the world's oldest and largest global conglomerates to meet the challenges of the 21st century. It offers an unparalleled opportunity to learn how it's done from a master, detailing the trendsetting innovations Immelt pioneered that have made his vision a reality, including:

The critics were right: Jeff Immelt is no Jack Welch. Just as Welch embodied corporate leadership for the closing decades of the 20th century, Immelt has come to personify the 21st century CEO. As Esquire magazine said when it named him one of The 75 Most Important People of the 21st Century: "The day will come, when GE chairman and CEO, Jeff Immelt, will be viewed as the prototypical leader for the new century."

David Magee is the author of How Toyota Became #1; Turnaround: How Carlos Ghosn Rescued Nissan; The John Deere Way; and Ford Tough. His books have been reviewed in The Wall Street Journal, The Harvard Business Review, and Newsweek.