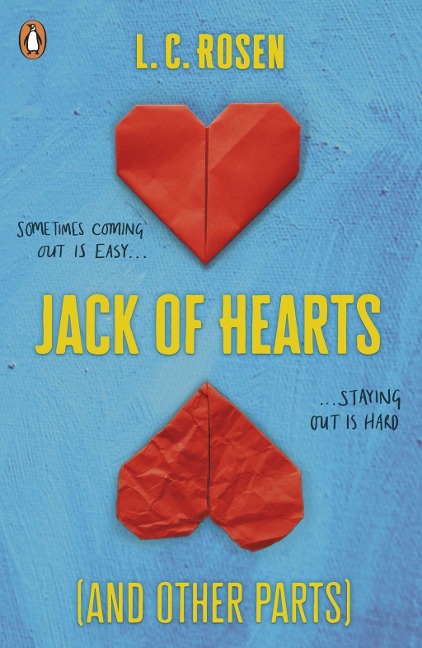 Jack of Hearts (And Other Parts)

Couldn't get enough of Love, Simon or Red, White and Royal Blue? This is the (slightly NSFW) book for you!

'This book is filth' Julian Clary

'My first time getting it in the butt was kind of weird. I think it's going to be weird for everyone's first time, though.'

His sex life makes him the hot topic for the high school gossip machine. But who cares? Like Jack always says, 'it could be worse'.

He doesn't actually expect that to come true.

But after Jack starts writing an online sex advice column, the mysterious love letters he's been getting take a turn for the creepy.

Jack's secret admirer knows everything: where he's hanging out, who he's sleeping with, who his mum is dating. They claim they love Jack, but not his unashamedly queer lifestyle. They want him to curb his sexuality, or they'll force him.

As the pressure mounts, Jack must unmask his stalker before their obsession becomes genuinely dangerous...

Praise for Jack of Hearts (and Other Parts)

'Humane, sex-positive writing of the funniest, filthiest and most heartening kind' The Guardian

The Diary of a Bookseller

The Gentleman's Guide to Vice and Virtue

A Field Guide To Getting Lost

Owning it: Your Bullsh*t-Free Guide to Living w...

How To Stop Time

A Curious History of Sex

The Princess Saves Herself in This One

The Places I've Cried in Public

Make it Happen: How to be an Activist

Get A Life, Chloe Brown

The Witch Doesn't Burn in This One