Ivan & Friends Paperback 2-Book Box Set: The One and Only Ivan, the One and O... – Katherine Applegate | buch7 – Der soziale Buchhandel
Bitte warten ... 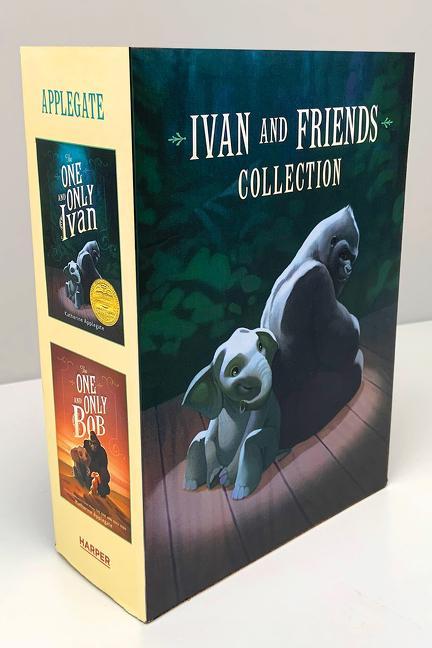 Discover the unforgettable world of best friends Ivan and Bob in this gorgeous illustrated paperback box set, including the Newbery Medal-winning The One and Only Ivan and its bestselling sequel, The One and Only Bob!

Ivan is an easy-going gorilla. Living at the Exit 8 Big Top Mall and Video Arcade, he has grown accustomed to humans watching him through the glass walls of his domain. He rarely misses his life in the jungle. Mostly, he thinks about art. Then he meets Ruby, a baby elephant taken from her family, and she makes Ivan see their home?and his own art?through new eyes. When Ruby arrives, change comes with her, and it's up to Ivan to make it a change for the better.

Continuing the story of these friends in The One and Only Bob, Bob sets out on a dangerous journey in search of his long-lost sister with the help of Ivan and Ruby. As a hurricane approaches and time is running out, Bob finds courage he never knew he had and learns the true meaning of friendship and family.

The One and Only Ivan is a modern classic that has enchanted readers for over a decade. The winner of the Newbery Medal and a #1 New York Times bestseller, the book was deemed ?extraordinary? by Bulletin for the Center of Children's Books and ?a must-have? by School Library Journal in starred reviews. And its sequel, The One and Only Bob, debuted at #1 on multiple bestseller lists, including the New York Times list, and was called ?pitch-perfect? by Kirkus Reviews and ?delightfully heartfelt and adventurous? by School Library Journal in starred reviews.

In the tradition of timeless stories like Charlotte's Web and Stuart Little, Katherine Applegate blends humor and poignancy to create an unforgettable story of friendship, art, and hope.

The One and Only Ivan and The One and Only Bob feature first-person narrative; author's use of literary devices (personification, imagery); and story elements (plot, character development, perspective).

These acclaimed middle grade novels are an excellent choice for tween readers in grades 5 to 8, for independent reading, homeschooling, and sharing in the classroom.

Katherine Applegate is the Newbery Medal-winning and #1 New York Times bestselling author of numerous books for young readers, including The One and Only Ivan, The One and Only Bob, Crenshaw, Wishtree, the Roscoe Riley Rules chapter books series, and the Animorphs series. She lives with her husband, who writes as the author Michael Grant, and their children in California.