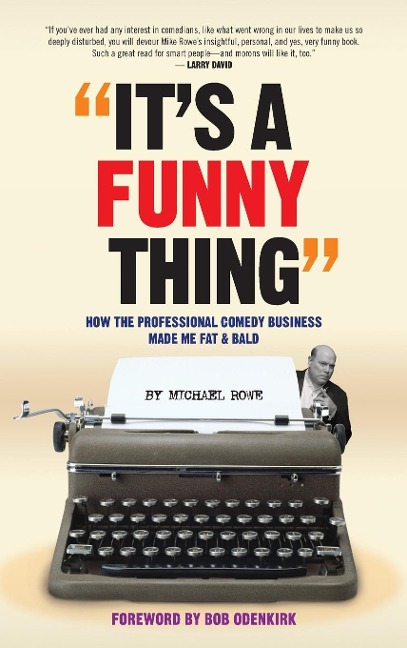 In this chronicle of one person's poignant and harrowing road to fulfillment, Mike celebrates his chosen life in the comedy business with personal tales of romantic calamities, celebrity run-ins, professional misfortunes, and triumphs. He reinforces the notion that you can accomplish (almost) anything you want if you're willing to get your ass kicked along the way.

It's a Funny Thing solidifies Michael Rowe's reputation as not just an all around nice guy, but also a skilled observer in self, the human condition, and dogged perseverance.

MICHAEL ROWE, a former comedian now comedy writer/producer, has been nominated for six Emmys for his work on Futurama and Family Guy, earning one along the way. Mike's also been nominated for two Annie Awards, earning two; a Writers Guild Award, and a Gemini Award. He has earned a Webby Award for his original animated series The Paranormal Action Squad. His writing has also appeared in Vanity Fair magazine. He lives in Los Angeles with his wife, twin sons and a silly dog named Marty Allen.

"If you've ever had any interest in comedians, like what went wrong in our lives to make us so
deeply disturbed, you will devour Mike Rowe's insightful, personal, and yes, very funny book.
Such a great read for smart people-and morons will like it, too."
- Larry David

"During long, grueling nights working way too late in the writers' room, when everyone had grown snarly and surly and silent, Mike would continue to pepper us with hilarious jokes. He was that cruel. And now he's written a book that's not only funny, but also sweet and sensitive. What is it with this guy?"
- Matt Groening

"Why would I want to read Mike's book that highlights the struggles of coming up the ranks in the New York comedy club scene? I was there with him! I could write that book  myself!! Then I read it and realized...I can't write like this! Son of a bitch."
-Ray Romano