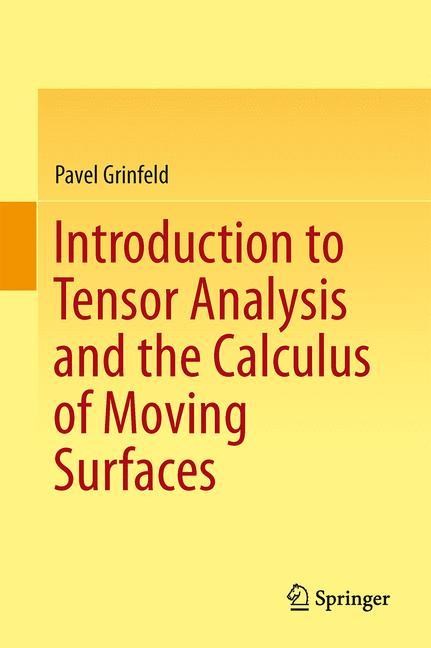 Introduction to Tensor Analysis and the Calculus of Moving Surfaces

This textbook is distinguished from other texts on the subject by the depth of the presentation and the discussion of the calculus of moving surfaces, which is an extension of tensor calculus to deforming manifolds.

Designed for advanced undergraduate and graduate students, this text invites its audience to take a fresh look at previously learned material through the prism of tensor calculus. Once the framework is mastered, the student is introduced to new material which includes differential geometry on manifolds, shape optimization, boundary perturbation and dynamic fluid film equations.

The language of tensors, originally championed by Einstein, is as fundamental as the languages of calculus and linear algebra and is one that every technical scientist ought to speak. The tensor technique, invented at the turn of the 20th century, is now considered classical. Yet, as the author shows, it remains remarkably vital and relevant. The author's skilled lecturing capabilities are evident by the inclusion of insightful examples and a plethora of exercises. A great deal of material is devoted to the geometric fundamentals, the mechanics of change of variables, the proper use of the tensor notation and the discussion of the interplay between algebra and geometry. The early chapters have many words and few equations. The definition of a tensor comes only in Chapter 6 - when the reader is ready for it. While this text maintains a consistent level of rigor, it takes great care to avoid formalizing the subject.

The last part of the textbook is devoted to the Calculus of Moving Surfaces. It is the first textbook exposition of this important technique and is one of the gems of this text. A number of exciting applications of the calculus are presented including shape optimization, boundary perturbation of boundary value problems and dynamic fluid film equations developed by the author in recent years. Furthermore, the moving surfaces framework is used to offer new derivations of classical results such as the geodesic equation and the celebrated Gauss-Bonnet theorem.

The author has published in a number of journals including 'Journal of Geometry and Symmetry in Physics' and 'Numerical Functional Analysis and Optimization'. Grinfeld received his PhD from MIT under Gilbert Strang.

Preface.- Why Tensor Calculus?.- 1. Rules of the Game.- 2. Coordinate Systems and the Role of Tensor Calculus.- 3. Change of Coordinates.- 4. Tensor Description of Euclidean Spaces.- 5. The Tensor Property.- 6. Covariant Differentiation.- 7. Determinants and the Levi-Civita Symbol.- 8. Tensor Description of Surfaces.- 9. Covariant Derivative of Tensors with Surface Indices.- 10. The Curvature Tensor.- 11. Covariant Derivative of Tensors with Spatial Indices.- 12. Integration and Gauss's Theorem.- 13. Intrinsic Features of Embedded Surfaces.- 14. Further Topics in Differential Geometry.- 15. Classical Problems in the Calculus of Variations.- 16. Equations of Classical Mechanics.- 17. Equations of Continuum Mechanics.- 18. Einstein's Theory of Relativity.- 19. The Rules of Calculus of Moving Surfaces.- 20. Applications of the Calculus of Moving Surfaces.