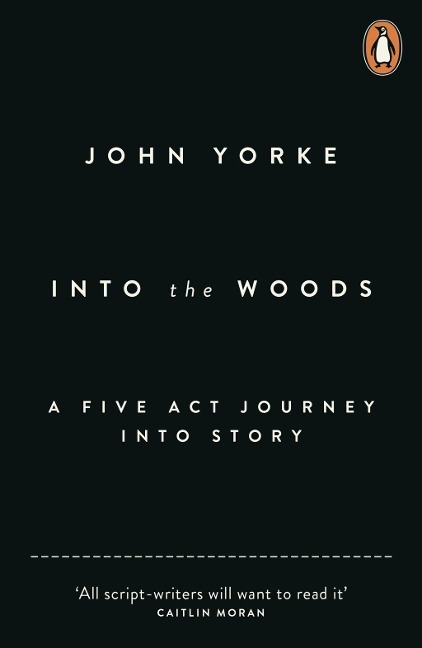 How Stories Work and Why We Tell Them

Into The Woods is a revelation of the fundamental structure and meaning of all stories, from the man responsible for more hours of drama on British television than anyone else, John Yorke.

We all love stories. Many of us love to tell them, and even dream of making a living from it too. But what is a story? Hundreds of books about screenwriting and storytelling have been written, but none of them ask 'Why?' Why do we tell stories? And why do all stories function in an eerily similar way?

John Yorke has been telling stories almost his entire adult life, and the more he has done it, the more he has asked himself why? Every great thinker or writer has their theories: Aristotle, David Hare, Lajos Egri, Robert McKee, Gustav Freytag, David Mamet, Christopher Booker, Charlie Kaufman, William Goldman and Aaron Sorkin - all have offered insightful and illuminating answers. Here, John Yorke draws on these figures and more as he takes us on a historical, philosophical, scientific and psychological journey to the heart of all storytelling.

What he reveals is that there truly is a unifying shape to narrative - one that echoes the great fairytale journey into the woods, and one, like any great art, that comes from deep within. Much more than a 'how to write' book, Into the Woods is an exploration of this fundamental structure underneath all narrative forms, from film and television to theatre and novel-writing. With astonishing detail and wisdom, John Yorke explains to us a phenomenon that, whether it is as a simple fable, or a big-budget 3D blockbuster, most of us experience almost every day of our lives.

'So detailed and engaging is his methodology that any consumer of books, plays, TV or films will find the experience enhanced; and scriptwriters themselves will find useful guidance - because when you know the why, the how is natural'  Robert Epstein, Independent on Sunday

'This is a marvellous analysis of screenwriting and, with any luck, should help a great many people achieve their dreams'  Julian Fellowes, writer/creator of Downton Abbey

'Another book on screenwriting! Oh, how I wanted to hate it! I didn't. I loved it. Much of it was fresh to me. And always interesting, always intelligent and, for a writer, always rewarding'  Jimmy McGovern, screenwriter, The Street and The Accused

'In an industry full of so called script gurus and snake oil salesmen, at last there's a book about story that treats writers like grown ups. This isn't about providing us with an ABC of story or telling us how to write a script by numbers. It's an intelligent evaluation into the very nature of storytelling and is the best book on the subject I've read. Quite brilliant'  Tony Jordan, screenwriter, Life on Mars and Hustle

'Even for a convinced sceptic, John Yorke's book, with its massive field of reference from Aristotle to Glee, and from Shakespeare to Spooks, is a highly persuasive and hugely enjoyable read. It would be hard to beat for information and wisdom about how and why stories are told'  Dominic Dromgoole, Artistic Director, The Globe Theatre

'This book is intelligent, well written, incisive and, most of all, exciting. It is the most important book about scriptwriting since William Goldman's Adventures in the Screen Trade'  Peter Bowker, screenwriter, Blackpool, Occupation and Eric & Ernie

'Part 'How-to' manual, part 'why-to' celebration, Into The Woods is a wide-reaching and infectiously passionate exploration of storytelling in all its guises ... exciting and thought-provoking'  Emma Frost, screenwriter, The White Queen and Shameless

'Into The Woods is an amazing achievement. It has a real depth and understanding about story, a fantastically broad frame of reference and it's interesting and absorbing throughout. Full of incredibly useful insights, every TV writer should read the first chapter alone'  Simon Ashdown, series consultant, EastEnders

'Testing the adage that "in theory there's no difference between theory and practice but in practice there is", this is a love story to story -- erudite, witty and full of practical magic. It's by far the best book of its kind I've ever read. I struggle to think of the writer who wouldn't benefit from reading it -- even if they don't notice because they're too busy enjoying every page' Neil Cross, creator of Luther and writer of Dr Who, Spooks and currently NBC's Crossbones

'All script-writers will want to read Into The Woods. All plots and archetypes BUSTED' Caitlin Moran

'Got to say Into The Woods by John Yorke is marvellous. The prospect of another screenwriting book made me yawn, but its terrific ... It's a great read, wise and cogent, and a must for all screenwriters' David Eldridge

'A mind-blower ... an incredibly dense but very readable tome about the art of storytelling ... Really worth a read' Lenny Henry, The Independent

'Into The Woods is brilliant. One of the best books on script writing out there' Dominic Mitchell, writer/creator, In The Flesh

John Yorke is Managing Director of Company Pictures, the UK drama independent producing Skins, Shameless, The White Queen and Wolf Hall.  For many years he's been responsible for a vast array of British drama; as both Head of Channel Four Drama and Controller of BBC Drama Production he's worked on big popular works such as Hustle, Spooks, Casualty and Holby City alongside award-winners such as Bodies, Omagh, Sex Traffic, Not Only But Always and The Curse of Steptoe. His career began single-handedly story-lining EastEnders in its very first BAFTA winning year - beginning a 14 year association that produced some of the biggest audiences in British television history. As a commissioning Editor/Executive Producer, he championed some of the defining works of British television including Life On Mars, The Street, Shameless and Waterloo Road. In 2005 he created the BBC Writers Academy, a year-long in-depth training scheme which has produced a generation of successful television writers.  He's also worked as Editor of The Archers. John is Visiting Professor of English Language and Literature at the University of Newcastle-upon-Tyne. He lives and works in London.