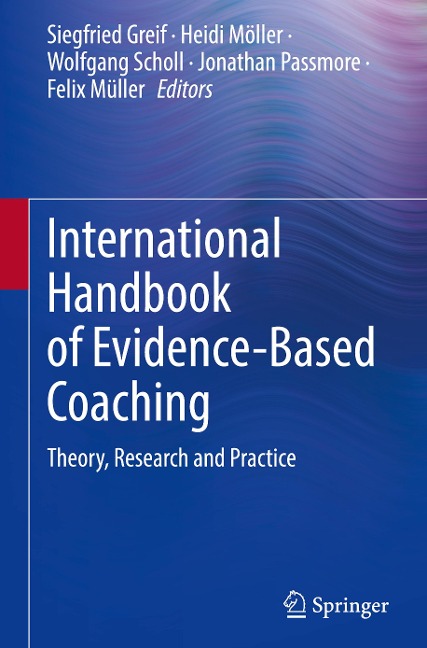 This handbook comprehensively covers the fundamental key concepts in coaching research and evidence-based practice and shows how coaching can be applied to multiple contexts. It provides coaching scholars, researchers and practitioners with detailed review of the key concepts, research and new insights into coaching research and practice. This key reference work includes over 70 contributions from more than 110 leading researchers and practitioners in the field across countries, and deftly combines theory with case studies and applications from psychology, sociology, business administration, organizational studies, education, and communication studies. This handbook, edited by the top scholars in the field, is meant for an academic as well as a professional readership, and is an invaluable resource for coaches, clients, coaching institutes and associations, and students of coaching.

Siegfried Greif, PhD, is retired Professor at the University of Osnabrueck, Germany (Chair of Work and Organizational Psychology). He is member of the German Psychological Society, the German Coaching Federation (DBVC) and the International Society of Coaching Psychology (ISCP) and is a member of the Scientific Advisory Council of The Institute of Coaching (IoC) associated with Harvard Medical School, USA. He teaches coaching at different Universities and gives courses to practitioners associated with the Free University of Berlin. The major fields of his research are coaching, stress at work and change management. He has authored and edited of 19 books and published many book chapters and articles in German and English, especially on coaching, change management, stress at work and evaluation instruments, see his publications list on ResearchGate.

Heidi Möller has a doctorate in psychology (psychotherapy in total institutions), habilitation on quality criteria of supervision from TU Berlin, and is a psychoanalyst, teaching therapist for depth psychology and Gestalt therapy, teaching supervisor, organizational consultant and coach. In 2002, she was Chair of Communication Psychology and Psychotherapy at the University of Innsbruck. Since October 2007, she has been Professor for Theory and Methodology of Consulting at the University of Kassel. She is member of the German Psychological Society, the German Coaching Federation (DBVC)The major fields of his research are research in coaching outcomes and process research., development of the counsellor and psychotherapist personality and gender justice in organisations. She is the head of numerous postgraduate study programmes, currently the Master's in Coaching, Organisational Counselling (COS) and Supervision, UNIKIMS, Kassel.

Wolfgang Scholl is Emeritus Professor at Humboldt University (Chair of Organizational and Social Psychology), Berlin, Germany. He is Initiator and Partner of artop - GmbH (Work and Technology Design, Organizational and Human Resource Development Ltd.) which is a coopted as institute at Humboldt University and is active in consulting, training, and applied research. He authored several books and many articles in German and English, especially on groups, innovation processes, organizational decision-making, power relations, knowledge production, basic interaction theory, and - last not least - on the relations between research and practice.

Jonathan Passmore is Professor of Coaching and Behavioural Change at Henley Business School, a Fellow of the British Psychological Society and an ICF credentialled coach. He has authored and edited of 30 books including Excellence In Coaching, Top Business Psychology Models, Becoming a Coach, and is the Series Editor for the Wiley Blackwell Organisational Psychology Series. He has also published over 100 scientific papers and book chapters and is the editor of the International Coaching Psychology Review, the premier coaching peer review journal. He was listed as a Global Top 8 Coach in the Marshall Goldsmith list in 2019 and has won awards from the British Psychological Society, Business Psychologists and Association for Coaching for his work.

Felix Mueller is an independent coach, leadership development expert and facilitator based in Munich, Germany. He holds masters degrees in business from the University of St. Gallen in Switzerland (lic.oec.HSG) and Duke University's Fuqua School of Business in the USA (MBA), as well as a psychology-oriented MSc in coaching and behavioural change from Henley Business School at the University of Reading in the UK. Since 2013, he has been supporting leaders and managers from mid- to top management as coach; he is certified as Associate Certified Coach (ACC) by the International Coaching Federation (ICF) and as MBTI Step I & II Certified Practitioner. His research interest lies in building bridges between science and practice so that coaching becomes more rooted in evidence.