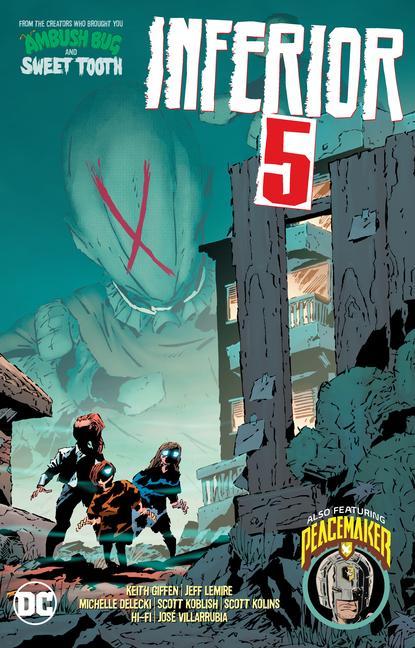 The citizens of Dangerfield, Arizona, are beset by strange goings-on after the "Invasion" that rocked the DC Universe, but only five misfit kids seem to notice them.

Can they uncover what's happening before some sinister force collects them all? Plus, the Peacemaker is on a top-secret mission from Checkmate and Amanda Waller to find a mysterious weapon before the Russians can. What will happen when their worlds collide?

It's meant to be the days of Earth's rebirth after the dreaded Invasion, but it doesn't look like the Dominators have left Dangerfield, Arizona, nor are they done making the "Inferior Five" their unwitting cat toys!

Keith Giffen has provided plotting, scripting, artwork, or any combination thereof for titles such as All-Star Comics, Legion Of Super-Heroes, Ragman, Creeper, Lobo, Suicide Squad, The Defenders, Hero Squared!, and Ambush Bug. He's worked on the weekly series 52 and Countdown to Final Crisis, as well as 52 Aftermath: The Four Horsemen and Midnighter, plus a gazillion other things.

Award-winning Canadian cartoonist Jeff Lemire is the creator of the acclaimed monthly comic book series SWEET TOOTH published by DC/Vertigo and the award winning graphic novel Essex County published by Top Shelf. Now one of DC Comics cornerstone writers, Jeff was prominent in the publisher's recent "New 52" line-wide relaunch as the writer of ANIMAL MAN, JUSTICE LEAGUE DARK and FRANKENSTEIN: AGENT OF S.H.A.D.E. He has also written the monthly adventures of SUPERBOY, THE ATOM and CONSTANTINE. In 2008 Jeff won the Schuster Award for Best Canadian Cartoonist and The Doug Wright Award for Best Emerging Talent. He also won the American Library Association's prestigious Alex Award, recognizing books for adults with specific teen appeal. He has also been nominated for 5 Eisner awards and 5 Harvey Awards. In 2010 Essex County was named as one of the five Essential Canadian Novels of the Decade. He currently lives and works in Toronto with his wife and son.