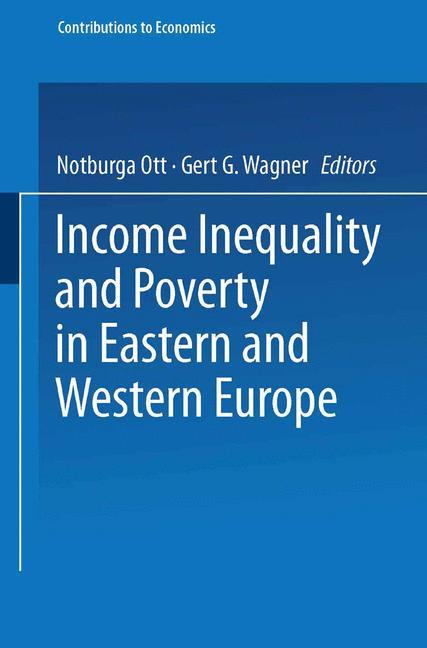 Income Inequality and Poverty in Eastern and Western Europe

The contributions of this collected volume are the result of a call for papers. The authors met and discussed their drafts at the workshop "Inequality in Europe", organized by the editors. The workshop was sponsored by the "Population Economics" section of the German Association for Demography ("Deutsche Gesellschaft fuer Bevoelkerungs­ wissenschafl" - DGBw) and by the "Josef-Popper-Naehrpflicht" Foundation. The aim of this foundation, located at the Johann-Wolfgang-Goethe-University of Frankfurt am Main, is to support research dealing with problems of achieving a "reasonable" standard of living. Originally the aim of the foundation was to further the notion of a guaranteed minimum income ("allgemeine Naehrpjlicht"). The publication of this book is also sponsored by this foundation. The workshop was held at the "Evangelische Akademie Arnoldshain", near Frankfurt am Main. The helpful discussions during the workshop benefitted greatly from the friendly atmosphere of the academy. Some of the articles were financially supported by the "Panel Comparability" Project (PACO), located at CEPS (Centre d'Etudes de Populations, de Pauvrete et de Politiques Socio-Economiques) in Luxembourg. PACO is a joint activity of the German Institute for Economic Research (DrW) in Berlin, CEPS and some other institutions in European countries. It is sponsored by grant No. ERBCHRX-CT92- 0037 ("European Network on Longitudinal Household Panel Studies Meeting Technology Requirement for Comparative Research") of the "Human Capital and Mobility" program of the Commission of the European Community.

Income Inequality and Poverty in Eastern and Western Europe: An Introduction.- Competitive or Cooperative Welfare Policies in Europe?.- The Main Problems of International Comparative Poverty Research.- Working Poor: "Inequitable" Wages in Germany and in Europe! - (Higher) Minimum Wages as an Instrument of Justice?.- Measurement of Poverty - Examplified by the German Case.- Poverty and Social Security Transfers - Results for Seven Countries and Regions in the EC.- Old Age Poverty in Selected Countries of the European Union - Are Women Disproportionally Affected?.- Changes in the Rate and Types of Poverty: The Czech and Slovak Republics 1990-1993.- Social Inequality and Poverty in Russia.- Poverty in Hungary - Some Results of the First Two Waves of the Hungarian Household Panel Survey in 1992 and 1993.- Income Inequality and Poverty Dynamics in Poland and East-Germany Before and Under Transition.- Trends in the Income Distribution of Unified Germany Analyzed by Decomposable Inequality Measures.