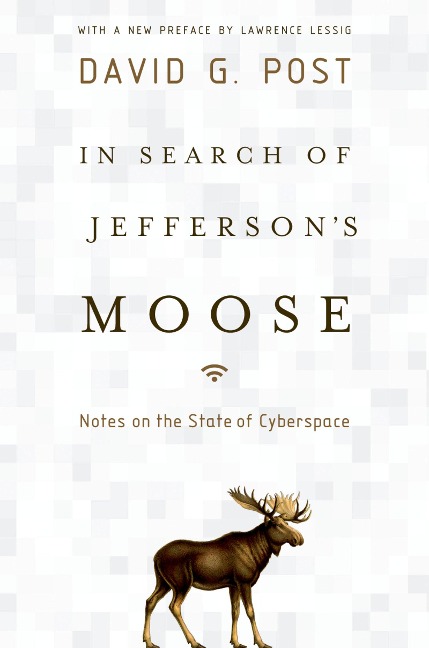 In Search of Jefferson's Moose

Notes on the State of Cyberspace

In 1787, Thomas Jefferson, then the American Minister to France, had the "complete skeleton, skin & horns" of an American moose shipped to him in Paris and mounted in the lobby of his residence as a symbol of the vast possibilities contained in the strange and largely unexplored New World. Taking a cue from Jefferson's efforts, David Post, one of the nation's leading Internet scholars, here presents a pithy, colorful exploration of the still mostly undiscovered territory of cyberspace--what it is, how it works, and how it should be governed.

What law should the Internet have, and who should make it? What are we to do, and how are we to think, about online filesharing and copyright law, about Internet pornography and free speech, about controlling spam, and online gambling, and cyberterrorism, and the use of anonymous remailers, or the practice of telemedicine, or the online collection and dissemination of personal information? How can they be controlled? Should they be controlled? And by whom? Post presents the Jeffersonian ideal--small self-governing units, loosely linked together as peers in groups of larger and larger size--as a model for the Internet and for cyberspace community self-governance. Deftly drawing on Jefferson's writings on the New World in Notes on the State of Virginia, Post draws out the many similarities (and differences) between the two terrains, vividly describing how the Internet actually functions from a technological, legal, and social perspective as he uniquely applies Jefferson's views on natural history, law, and governance in the New World to illuminate the complexities of cyberspace.

In Search of Jefferson's Moose is a lively, accessible, and remarkably original overview of the Internet and what it holds for the future.

David Post is currently the I. Herman Stern Professor of Law at the Beasley School of Law at Temple University, where he teaches intellectual property law and the law of cyberspace. He is also an Adjunct Scholar at the Cato Institute, a Fellow at the Institute for Information Law and Policy at New York Law School, and a contributor to the influential Volokh Conspiracy blog. For more information, please visit: www.jeffersonsmoose.org.

Preface
Acknowledgements
A Note to the Reader

Prologue: The Fox, the Hedgehog, and the Moose

Epilogue: Jefferson's Nature, and the Nature of Cyberspace