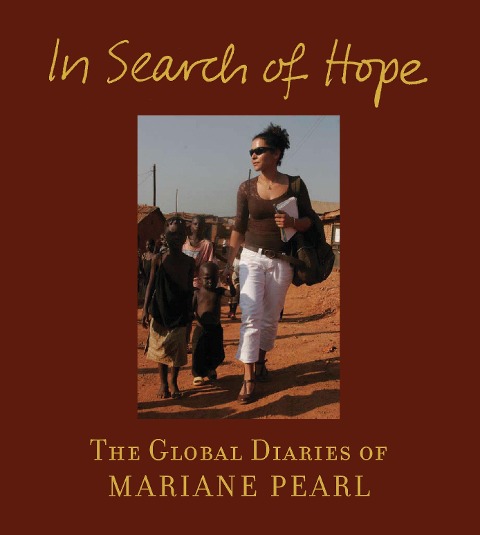 In Search of Hope: The Global Diaries of Mariane Pearl

Mariane Pearl started traveling the globe for Glamour magazine in 2006 to profile courageous women and show that hope is stronger than fear. During the first year of writing her monthly "Global Diary" column, Pearl logged nearly 100,000 miles and met 12 brave, determined women-true agents of change in their communities-who make the world a more just and harmonious place despite personal hardship, discouraging odds and even death threats. In Search of Hope: The Global Diaries of Mariane Pearl introduces readers to these everyday heroes. The limited-edition run of In Search of Hope features more than 200 previously unpublished images from Pearl's travels and updates on the women since they were first profiled in the magazine. Mariane's good friend, Angelina Jolie, who also portrays her in A Mighty Heart, has written a touching and personal tribute to Mariane as the foreword for In Search of Hope.

Among some of the inspirational women readers will meet are Somaly Mam, a former child sex slave in Cambodia who now rescues girls from forced prostitution; Liberian president Ellen Johnson Sirleaf, the first woman to be elected head of an African country; Lydia Cacho, the intrepid Mexican reporter who exposes violence against women and children despite repeated threats on her life; Sheila Watt-Cloutier, the Inuit leader and a Nobel Peace Prize nominee working toward the reverse of global warming; and Dr. Julian Atim, a Ugandan AIDS orphan-turned-doctor fighting for health rights in her country.

"The women featured here are all different and their context varies widely, yet you will find the same active principle animating them. This is the ultimate value of hope," says Mariane Pearl. "These women teach us a lot about the power of human empathy and the value of beauty that emanates from them as they progress on this lonely yet magnificent path that will lead them to become a genuine source of hope for all people."

"As anyone who's seen or read A Mighty Heart knows, Mariane is a woman of incredible personal strength," says Cindi Leive, Glamour editor-in-chief. "But as millions of Glamour readers have learned, she's also a fiercely committed journalist. She set out to find women who are changing the world-and the stories she's brought back, collected here for the first time, are the kind of personal profiles that alter your thinking forever."

Mariane Pearl's acclaimed "Global Diary" column for Glamour has been featured in The New York Times and on CNN, and has been recognized as a National Headliner Award winner. Glamour will donate 100 percent of its proceeds and royalties from all books sold on glamour.com to charities selected by the women profiled.

Mariane Pearl is a documentary filmmaker and author of A Mighty Heart: The Brave Life and Death of My Husband, Danny Pearl. The book is available in 18 countries and has won two international awards. In addition to her Glamour magazine column, Pearl has written for The New York Times, Condé Nast Traveler, and The Sunday Times of London. She lives in Paris with her son Adam.

Glamour magazine inspires 12 million readers each month with its coverage of beauty, fashion, health, and relationships, as well as women's issues, work, money and more. This unique combination of beauty and brains has made Glamour the industry's most award-winning women's publication for more than 65 years.