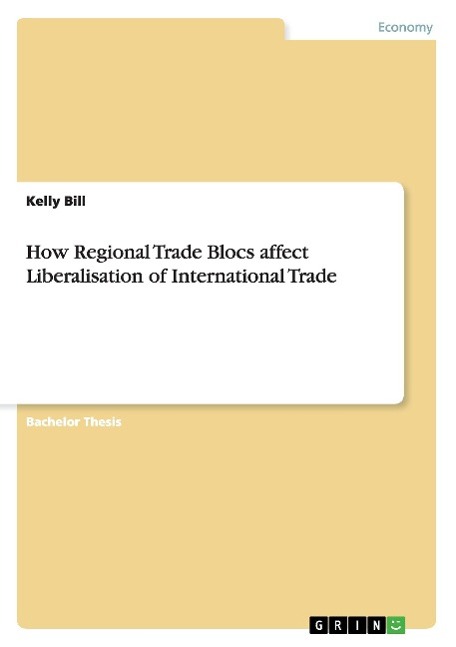 Bachelor Thesis from the year 2011 in the subject Business economics - Trade and Distribution, grade: B+, Stanford University, language: English, abstract: A trade bloc is a preferential trade agreement between a range of nations, aimed at significantly reducing or removing trade barriers within the member states. Regional trade blocs are formed by neighbouring countries or countries that are in close proximity to each other. The two key features of a trade bloc is that (1) it involves a cutback or abolition of obstacles to trade, and (2) the trade liberalisation that is attained through the trade bloc is discriminatory in purview of the fact that it is applicable only to the member states of the trade bloc and non-member countries are shown prejudice in their dealings with members of the trade bloc.
The first aspect of trade blocs above is in line with the mission of the World trade Organisation (WTO) and its antecedent, the General Agreement on Tariffs and Trade (GATT). The principle of Non-discrimination under the GATT stipulates that no member state shall show prejudice between GATT members during the operations of world trade.  In the same magnitude, the WTO offers an environment for negotiating agreements that are focused on reducing barriers to international trade and making sure that trade is carried out on a basis of openness, thus contributing to economic growth as well as development.  Notably, although trade blocs have different structures, they are premised on the same objective, that is, to lessen trade barriers among member states.
The second aspect of trade blocs however seems to be in conflict with the motive of the GATT/WTO system. The preamble of the GATT is very clear on promoting non-discrimination in international trade by reinforcing the need for reciprocal and equally advantageous arrangements focused on substantial cutbacks in tariffs and other obstacles to trade and to the abolition of discriminatory treatment in international trade.  Equally, under the WTO as well as under its predecessor, the GATT, trade discrimination is promoted through the use of the principles of the Most-Favoured-Nation (MFN) that requires treatment of other people equally as pertains to trade and the principle of National Treatment which stipulates that foreigners and locals should be treated equally in trade matters.
The above overview of regional trading blocs implies that different opinions can be stated regarding how trading blocs affect liberalisation of trade. [...]