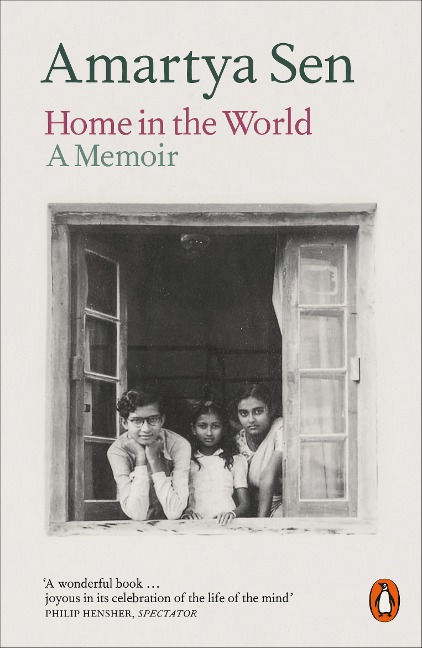 Home in the World

Where is 'home'? For Amartya Sen, home has been many places - Dhaka in modern Bangladesh, the little university town of Santiniketan, where he was raised as much by his grandparents as by his parents, Calcutta where he first studied economics and was active in student movements, and Trinity College, Cambridge, to which he came aged 19.

Sen brilliantly recreates the atmosphere in each of these. He remembers his river journeys between Dhaka and his parents' ancestral homes and wonderfully explores the rich history and culture of Bengal. In 1943 he witnessed the disastrous unfolding of the Bengal Famine, and the following year the inflaming of tensions between Hindus and Muslims. In the years before Independence, some of his family were imprisoned for their opposition to British rule.

Central to Sen's formation was the intellectually liberating school in Santiniketan founded by Rabindranath Tagore (who gave him his name Amartya) and exciting conversations in the Coffee House on College Street in Calcutta. In Cambridge, he engaged with many of the leading economists and philosophers of the day, especially with the great Marxist thinker Piero Sraffa, who provided a direct connection not only to Wittgenstein, but to Antonio Gramsci and the anti-fascist battles in Italy in the 1920s. After years in Europe and America, the book ends when he returns to Delhi in 1963.

Home in the World shows how Sen's experience shaped his ideas - about economics, philosophy, identity, community, famines, gender inequality, social choice and the power of discussion in public life. The joys of learning and the importance of friendship are powerfully conveyed. He invokes some of the great thinkers of the past and his own time - from Ashoka in the third century BC and Akbar in the sixteenth, to David Hume, Adam Smith, Karl Marx, John Maynard Keynes, Maurice Dobb, Kenneth Arrow and Eric Hobsbawm. Above all, Sen emphasises the importance of enlarging our views as much as we can, of human sympathy and understanding across time and distance, and of being at home in the world.

Amartya Sen is Professor of Economics and Professor of Philosophy at Harvard. He was Master of Trinity College, Cambridge, from 1998 to 2004, and won the Nobel Prize for Economics in 1998. His many celebrated books including Development as Freedom (1999), The Argumentative Indian (2005), Identity and Violence: The Illusion of Destiny (2007), and The Idea of Justice (2010), have been translated into more than 40 languages. In 2012 he received the National Humanities Medal from President Obama and in 2020 he was awarded the Peace Prize of the German Book Trade by President Steinmeier.