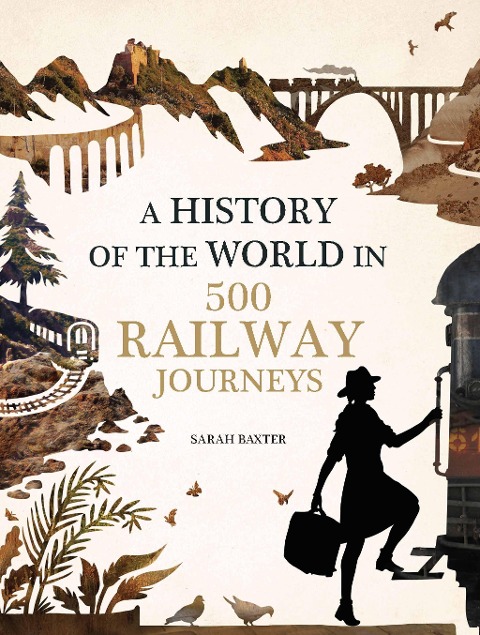 History of the World in 500 Railway Journeys

From ancient routes to modern marvels and high-speed bullets, it highlights the history and very best bits from each railway journey. From how many stops, to the duration and best views, it will offer a wealth of inspiration and knowledge.

Sarah Baxter grew up in Norfolk, England and now lives in Bath. Her passion for travel and the great outdoors saw her traverse Asia, Australia, New Zealand and the United States before settling into a writing career. She was Associate Editor of Wanderlust magazine, the bible for independent-minded travellers, for more than ten years and has also written extensively on travel for a diverse range of other publications, including the Guardian, the Telegraph and the Independent newspapers. Sarah has also contributed to more than a dozen Lonely Planet guidebooks.

CHAPTER ONE: PREHISTORY-THE DAWN OF TIME • Grotte de Rouffignac, Vézère valley, France-An electric cavern train that carries you past friezes and engravings of rhinos and mammoths • Caspian Odyssey, Armenia, Georgia, Azerbaijan, Turkmenistan, Uzbekistan and Kazakhstan-Explore countries on the east and west of the Caspian Sea including 6,000 prehistoric rock engravings at Gobustan in Azerbaijan • Grand Canyon Railway, United States-Take a steam or diesel-pulled guided tour from Williams, Arizona to the South Rim of the Grand Canyon National Park, in beautifully restored vintage railcars • The Glacier Express, Alps, Switzerland-Witness spectacular "Ice Age" glacial scenery from Zermatt, at the foot of the Matterhorn to Saint Moritz • Crossrail, London United Kingdom (opens 2018)-This 62 mile (110 km) feat of engineering across London has unearthed a layer cake of history beneath its streets including prehistoric animal bones

CHAPTER TWO: THE ANCIENT WORLD-DAWN-600 CE • Trans Mongolian Express, Russia, Mongolia, China (easternbound)-Follow the ancient tea route from China to Russia, taking in the Great Wall of China • Desert Express, Namibia, Africa-More wildlife safari than train ride, see giraffes, zebras, elephants, dolphins and the Welwitschia mirabilis, Namibia's most famous plant, some of which are said to be over 1,500 years old • Athens to Thessaloniki, Greece-This 4.5-hour, domestic InterCity service includes stunning views of Mount Olympus, the mythical home of the Greek gods • Rome to Ostica Antica, Italy-A classic route from the magnificent Colosseum to the beautifully-preserved ruins of Ostia, the old port city of Ancient Rome • Cairo to Alexandria, Egypt-An Egyptian odyssey from historic Rameses Railway Station in Cairo, gateway to Giza's Pyramids, to Alexandria's "Pearl of the Mediterranean" via the palm-dotted plains of the Nile Delta

CHAPTER THREE: MIDDLE AGES-600-1500 CE • Eastern and Oriental Express, Thailand -This most exotic of train services includes a route through the "Ancient Kingdom of Lanna", from Bangkok to the northern Thailand cities of Lampang and Chiang Mai • Copenhagen to Roskilde, Denmark-Take a "Viking Voyage" from the capital's National Museum to the island of Zealand to witness Viking ships excavated from the nearby Roskilde Fjord • Balkan Explorer, Istanbul to Venice-Explore Ottoman and Byzantine sites and the turquoise coastlines of the Balkan and surrounding nations • Vodkatrain, The Marco Polo, Istanbul to Beijing-Follow in the footsteps of the Italian explorer Marco Polo along the Silk Road, linking Europe with Asia • Paris to Chartres, Frances-An enlightening day trip to the double-spired, stainedglass, Gothic splendor of Cathedral Notre-Dame de Chartres

CHAPTER FOUR: TOWARD THE MODERN WORLD-1500-1800 CE • Palace on Wheels, India-Match the palatial, Rajput-inspired interiors of this famed ride with a round tour from New Delhi through royal Rajasthan • The Ghan/Indian Pacific, Australia-Explore the vast continent that is Australia, with this epic train ride down country from Darwin to Adelaide, then on to Sydney, where the first British colony made its base • Florence to Venice, Italy-From the "City of Water" to the birthplace of Renaissance Italy, with non-stop architectural and artistic splendour along the way • The Hague to Haarlem, Netherlands-Ride to the heart of the Dutch Golden Age from Vermeer's Girl with the Pearl Earring in The Hague, to "Tulip Mania" in blooming Haarlem • Konkan Railway, Mumbai to Goa, India-Travel to the namesake town of Portuguese explorer Vasco de Gama, and beyond to beautiful Goan beaches, on a stunning route through lush valleys and mythical mountains

CHAPTER FIVE: 19TH-CENTURY RAILWAY JOURNEYS • Trans Siberian Express, Moscow to Vladivostok, Russia-Experience the vast Russian landscape via one of the longest train journeys in the world; and be glad you didn't have to help build it • Venice Simplon-Orient Express, Paris, France to Istanbul, Turkey-Make like Hercule Poirot and travel in the tracks of the original Orient Express' 1883 inaugural journey in a luxury Art Deco coach • Settle to Carlisle Railway, Yorkshire Dales to Scottish Borders, United Kingdom- Highlights of this bucolic journey include limestone scenery, Victorian architecture and the impressive 24 arches of the Ribblehead Viaduct, built 1870-1874 • Rocky Mountaineer, Vancouver to Banff/Calgary, Canada-Follow the former "Kicking Horse Route", now "First Passage to the West", over the famous Canadian Pacific Railway (opened 1885) with epic views of the monumental Rockies • Arctic Circle Train, Kiruna, Sweden to Narvik, Norway-Experience the midnight sun, polar night and the Northern Lights, in one of the northernmost railways in the world, a nod to the nineteenth-century "Race to the North Pole"