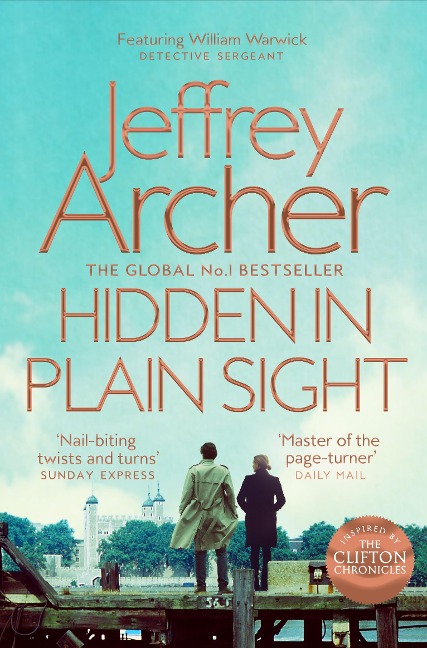 Hidden in Plain Sight is the second brilliant and captivating novel featuring William Warwick by the master storyteller and bestselling author of the Clifton Chronicles, Jeffrey Archer.

Newly promoted, Detective Sergeant William Warwick has been reassigned to the drugs squad. His first case: to investigate a notorious south London drug lord known as the Viper.

But as William and his team close the net around a criminal network unlike any they have ever encountered, he is also faced with an old enemy, Miles Faulkner. It will take all of William's cunning to devise a means to bring both men to justice; a trap neither will expect, one that is hidden in plain sight . . .

Filled with Jeffrey Archer's trademark twists and turns, Hidden in Plain Sight is the gripping next instalment in the life of William Warwick. It follows on from Nothing Ventured, but can be read as a standalone story.

Jeffrey Archer, whose novels and short stories include the Clifton Chronicles, Kane and Abel and Cat O' Nine Tales, is one of the world's favourite storytellers and has topped the bestseller lists around the world in a career spanning four decades. His work has been sold in ninety-seven countries and in more than thirty-seven languages. He is the only author ever to have been a number one bestseller in fiction, short stories and non-fiction (The Prison Diaries).

Jeffrey is also an art collector, sports lover and amateur auctioneer, conducting numerous charity auctions every year. A member of the House of Lords for over a quarter of a century, the author is married to Dame Mary Archer, and they have two sons, two granddaughters and two grandsons.