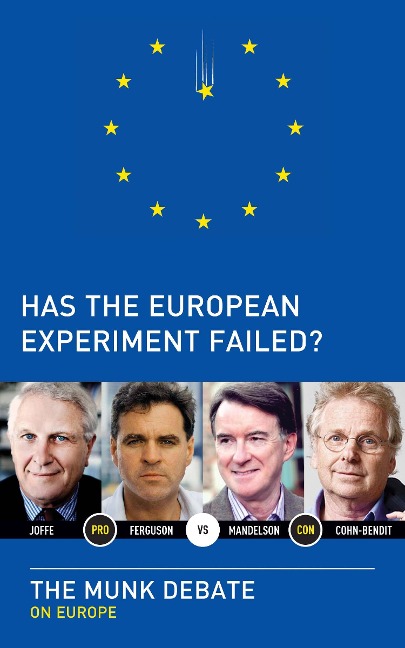 Has the European Experiment Failed?

In the sweep of human history, the European Union stands out as one of humankind's most ambitious endeavours. It encompasses half a billion people, twenty-seven member states, twenty-three languages, and an economy valued at over $15 trillion. Modern Europe's stunning achievements aside, its sovereign debt crisis has shaken the world's largest political and economic union to its core. Can the federal institutions and shared values of Europeans meet the challenges of debt crisis that are as much political as economic? Or, are Europe's current woes indicative of a series of deep structural faults that foreshadow the breakup and failure of the European Union?

In this edition of the Munk Debates -- Canada's premier international debate series -- former EU Commissioner Lord Peter Mandelson and EU parliament co-president of the Greens/European Free Alliance Group Daniel Cohn-Bendit,
German publisher-editor and author Josef Joffe, and renowned economic historian Niall Ferguson debate the future of the EU -- one of the most pressing global issues of our day.

For the first time ever, this electrifying debate, which played to a sold-out audience, is now available in print, along with candid interviews with Niall Ferguson and Lord Peter Mandelson. As youth unemployment rates flare, currencies collapse, and political alliances erode, the Munk Debate on Europe tries to answer: Has the great European experiment failed?

Niall Ferguson is the author of numerous bestselling books. A prolific commentator on contemporary politics and economics, Ferguson is a contributing editor for the Financial Times and senior columnist with Newsweek.