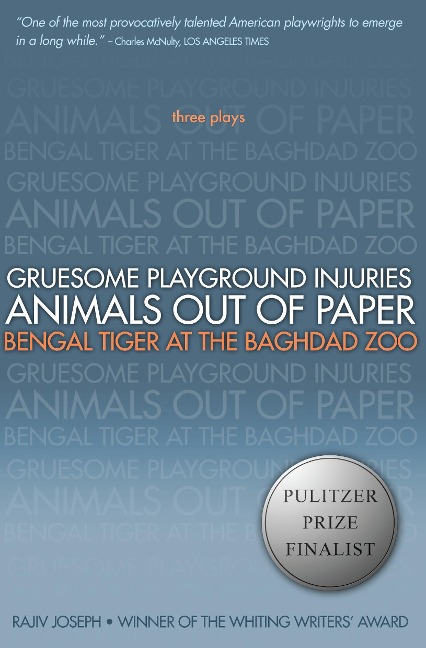 Gruesome Playground Injuries; Animals Out of Paper; Bengal Tiger at the Baghdad Zoo

Rajiv Joseph is one of today's most acclaimed young playwrights. The winner of numerous awards, including an NEA Award for Best Play and a Whiting Writers Award, he is an artist to watch. This volume gathers together for the first time his three major works to date.

Included herein are his latest play, Gruesome Playground Injuries, which charts the intersection of two lives using scars, wounds, and calamity as the mile markers to explore why people hurt themselves to gain another's love and the cumulative effect of such damage; Animals Out of Paper, a subtle, elegant, yet bracing examination of the artistic impulse and those in its thrall, which follows a world-famous origamist as she becomes the unwitting mentor to a troubled young prodigy, even as she must deal with her own loss of inspiration; and Bengal Tiger at the Baghdad Zoo, a darkly comedic drama that looks on as the lives of two American soldiers, an Iraqi translator, and a tiger intersect on the streets of Baghdad.
E-Book 10/2010

Rajiv Joseph is an American playwright and a 2010 Pulitzer Prize Finalist for his play, Bengal Tiger at the Baghdad Zoo. His productions include Gruesome Playground Injuries, Animals Out of Paper, The Leopard and the Fox, Huck & Holden, and All This Intimacy. The North Pool premiered in 2011 at Theatre Works in Palo Alto. He received his BA in Creative Writing from Miami University and his MFA in Dramatic Writing from NYU's Tisch School of the Arts. He served for three years with the Peace Corps in Senegal.