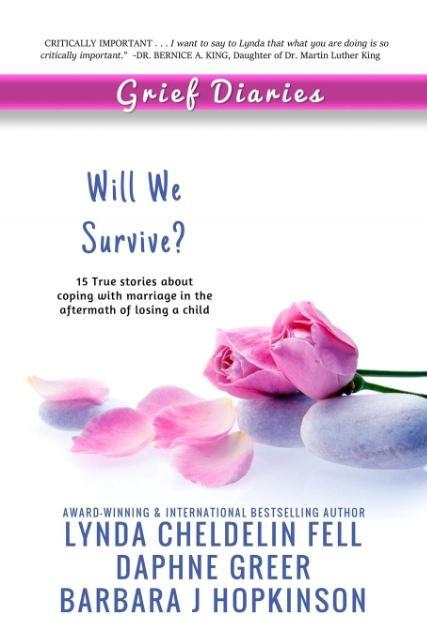 Part of the award-winning Grief Diaries book series, Will We Survive offers a unique glimpse into the impact on marriage and relationships following child loss. Fifteen bereaved parents share the struggles they faced in the aftermath including blame, coping differences, intimacy, and more.

Lynda Cheldelin Fell is an award-winning and international bestselling author, board president of the National Grief & Hope Coalition, and CEO of AlyBlue Media. Considered a pioneer in the field of inspirational hope in the aftermath of loss, Lynda has a passion for producing trailblazing projects that create a legacy of help, healing, and hope.

She has interviewed Dr. Martin Luther King's daughter, Trayvon Martin's mother, sisters of the late Nicole Brown Simpson; Pastor Todd Burpo of Heaven is For Real, CNN commentator Dr. Ken Druck, and other societal newsmakers on finding healing and hope in the aftermath of life's challenges and loss.

Lynda interviews Dr. Martin Luther King's daughter, Dr. Bernice King
Now one of the foremost resiliency experts in the United States, Lynda is dedicated to helping ordinary people share their own extraordinary stories through Grief Diaries, her groundbreaking series of anthology books exploring the intimate side of life while highlighting the true depth of human resiliency. The series began with eight titles exploring unique losses shared by people around the world. Over a hundred people in six countries registered for those first eight titles, and the books were launched in December 2015. Following their release, organizations and individuals began asking to join the series to help raise awareness about a larger spectrum of hardships. To date, more than 350 writers from around the world are contributing to thirty anthology titles now in the works.