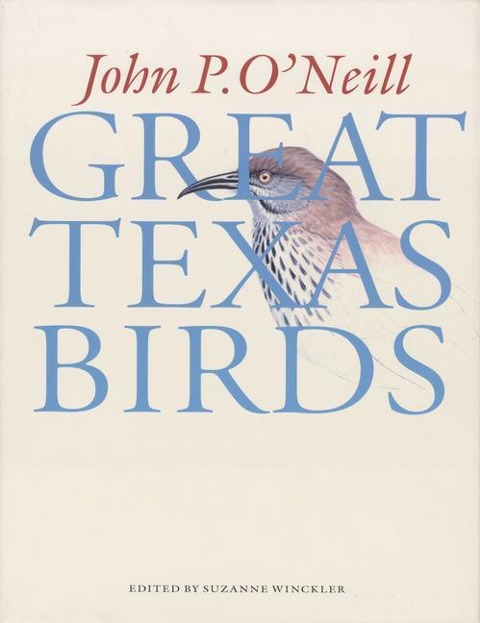 WHAT MAKES ANY BIRD A "GREAT" BIRD? For some birders, it's the rarity of a species that they've finally added to their life list after years of patient watching. Others will tell you that the great birds are the most beautiful ones, whose striking plumage amazes and delights us. But at heart most people know that the great birds are simply the ones we like the best, rare or common -- the ones that have imprinted themselves indelibly on our lives.

This beautiful book presents exquisite paintings of forty-eight Texas birds chosen by John O'Neill and Suzanne Winckler as their own personal "greats". Some of the birds are as common as they are beloved -- Northern Mockingbird, Eastern Bluebird, Northern Cardinal, and Ruby-throated Hummingbird, to name only a few. Others are definitely life-list birds -- rare, beautiful, exotic-sounding, or all three at once -- Crested Caracara, Plain Chachalaca, Purple Gallinule, Golden-Cheeked Warbler, and many others.

O'Neill and Winckler have also gathered a flock of well-known Texas birders and nature writers to offer personal, scientific, or literary observations about each bird. Of Sandhill Cranes, John Graves writes, "I am no priest nor anything like one, but I find myself invoking a blessing on these great gray birds when they show up, every spring and fall. May they endure". Bill Graber remembers the elation of seeing a Brown Pelican skimming over Galveston Bay in 1977, signaling the start of the species' recovery from near extinction due to DDT and other pesticides. Stephen Harrigan describes the indescribable glow of color from a Roseate Spoonbill on a winter's day, while Sally Graves Jackson quips of the endless "Who cooks for you?" call ofthe White-winged Dove that "some days the weary housewife in me mutters back under her breath, 'Nobody cooks for me, nobody!'" In all, forty-eight essays, one to a bird, are included here.