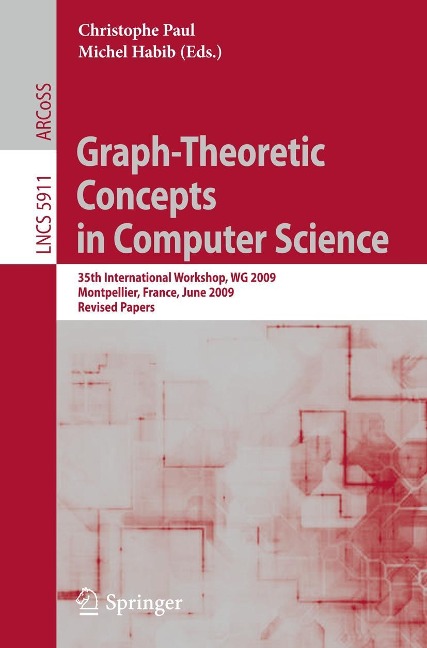 The 35th International Workshop on Graph-Theoretic Concepts in Computer Science (WG 2009) took place at Montpellier (France), June 24-26 2009. About 80 computer scientists from all over the world (Australia, Belgium, Canada, China, Czech Republic, France, Germany, Greece, Israel, Japan, Korea, The Netherlands, Norway, Spain, UK, USA) attended the conference. Since1975,ithastakenplace20timesinGermany,fourtimesinTheNeth- lands, twice in Austria, as well as once in Italy, Slovakia, Switzerland, the Czech Republic, France, Norway, and the UK. The conference aims at uniting theory and practice by demonstrating how graph-theoretic concepts can be applied to various areas in computer science, or by extracting new problems from appli- tions. The goal is to present recent research results and to identify and explore directions of future research. The conference is well-balanced with respect to established researchers and young scientists. There were 69 submissions. Each submission was reviewed by at least three, and on average four, Program Committee members. The Committee decided to accept 28 papers. Due to the competition and the limited schedule, some good papers could not be accepted. Theprogramalsoincludedexcellentinvitedtalks:onegivenbyDanielKràlon "AlgorithmsforClassesofGraphswithBoundedExpansion," the otherbyDavid Eppsteinon"Graph-TheoreticSolutionstoComputationalGeometryProblems." The proceedings contains two survey papers on these topics.