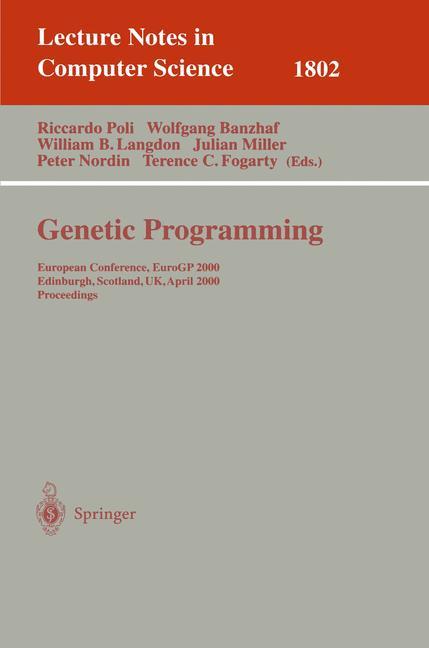 This volume contains the proceedings of EuroGP 2000, the European Conf- ence on Genetic Programming, held in Edinburgh on the 15th and 16th April 2000. This event was the third in a series which started with the two European workshops: EuroGP'98, held in Paris in April 1998, and EuroGP'99, held in Gothenburg in May 1999. EuroGP 2000 was held in conjunction with EvoWo- shops 2000 (17th April) and ICES 2000 (17th-19th April). Genetic Programming (GP) is a growing branch of Evolutionary Compu- tion in which the structures in the population being evolved are computer p- grams. GP has been applied successfully to a large number of di?cult problems like automatic design, pattern recognition, robotic control, synthesis of neural networks, symbolic regression, music and picture generation, biomedical app- cations, etc. In recent years,even human-competitive results have been achieved by a number of groups. EuroGP 2000, the ?rst evolutionary computation conference of the new m- lennium, was the biggest event devoted to genetic programming to be held in Europe in 2000. It was a high quality conference where state-of-the-art work on the theory of GP and applications of GP to real world problems was presented.