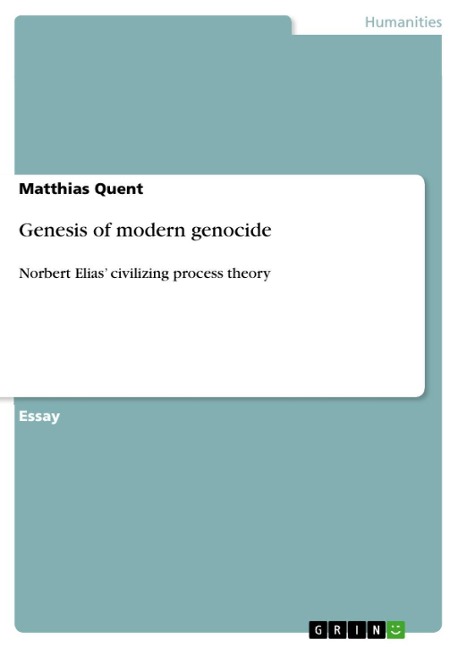 Essay from the year 2008 in the subject Sociology - Law, Delinquency, Abnormal Behavior, grade: 1,0, University of Leicester, language: English, abstract: The phrase that the 'civilized Western World' has to defence its values even by using physical violence is often mentioned by politicians and media makers. Especially the 'war on terror' draws a picture of the necessity of the West's force against the 'barbarism', which seems to menace the 'civilized' order. In fact that seems to be a contradiction in terms. How can underdeveloped, 'uncivilized' and uneducated people be able to menace the countries with the world most developed technologies and the highest standard of 'civilization', as it's often is said? Norbert Elias presents a theory of the civilizing process which includes the opinion, that a lot of things, which a member of the present-day Western civilized society esteems 'uncivilized' in other societies today, can be found in past epochs of his own society, like the medieval-feudal period. The key question to understand on the one hand the civilizing process itself and the problem of the so called 'breakdown of civilization' even in modern states on the other hand is how the civilizing of the West actually did happen?

Protecting Against The Unknown

Love In The Present Tense

The Glorious Life of the Oak

Love in the Time of Algorithms

Fuels and Energy From Renewable Resources