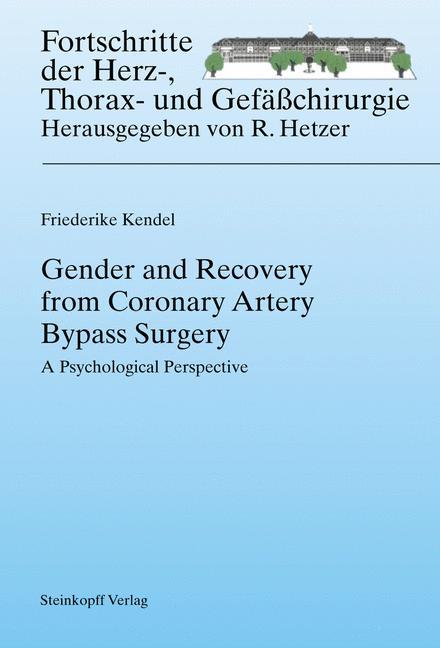 Progress in coronary artery bypass graft surgery has irrefutably improved the quality of life of many patients. However, we are confronted with the finding that women - hibit a higher mortality rate than men. In part, this difference can be explained by clinical parameters such as age, disease severity, or comorbidity - factors that have been well studied, but which do not fully explain the observed differences. This is one reason why, in recent years, psychosocial variables have attracted special atten- on in this context. In fact, women and men having undergone a bypass operation - ry a great deal with respect to, e. g. , depression, partner status, and socio-economic status. Moreover, psychological well-being, on the one hand, and social isolation, on the other hand, definitely influence the recovery process, particularly when consi- red under the gender aspect. The Deutsches Herzzentrum Berlin has been actively supporting gender-specific research for many years. In this context, a large prospective study on gender dif- rences in recovery after bypass surgery, carried out by the Competence Network of Heart Failure, was started at our Department for Cardiothoracic and Vascular Sur- ry. From the beginning of the study, psychosocial variables were included as being substantial contributors. The starting point of the study presented here* by psychologist Dr. Friederike Kendel are recent empirical investigations about gender differences in coronary heart disease and the course of recovery after bypass surgery.