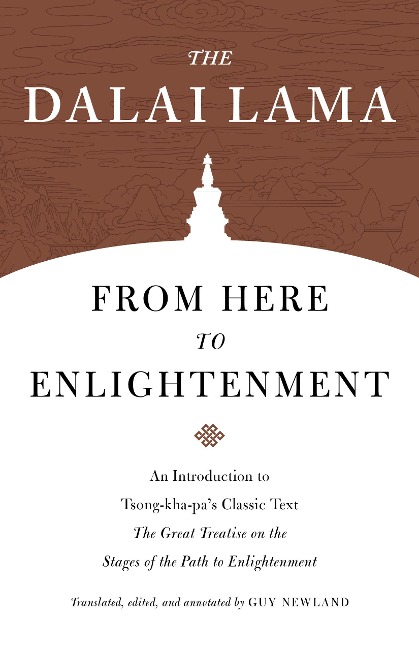 From Here to Enlightenment

The most extensive teaching given by the Dalai Lama in the West on a seminal Tibetan Buddhist text--now included in the Core Teachings of the Dalai Lama series.

When the Dalai Lama was forced to go into exile in 1959, he could take only a few items with him. Among these cherished belongings was his copy of Tsong-kha-pa's classic text The Great Treatise on the Stages of the Path to Enlightenment. This text distills all the essential points of Tibetan Buddhism, clearly unfolding the entire Buddhist path.

In 2008, celebrating the long-awaited completion of the English translation of The Great Treatise, the Dalai Lama gave a historic six-day teaching at Lehigh University to explain the meaning of the text and to underscore its importance. It is the longest teaching he has ever given to Westerners on just one text, and the most comprehensive. From Here to Enlightenment makes the teachings from this momentous event available for a wider audience.

His Holiness the Fourteenth Dalai Lama is considered the foremost Buddhist leader of our time. The exiled spiritual head of the Tibetan people, he is a Nobel Peace Laureate, a Congressional Gold Medal recipient, and a remarkable teacher and scholar who has authored over one hundred books.