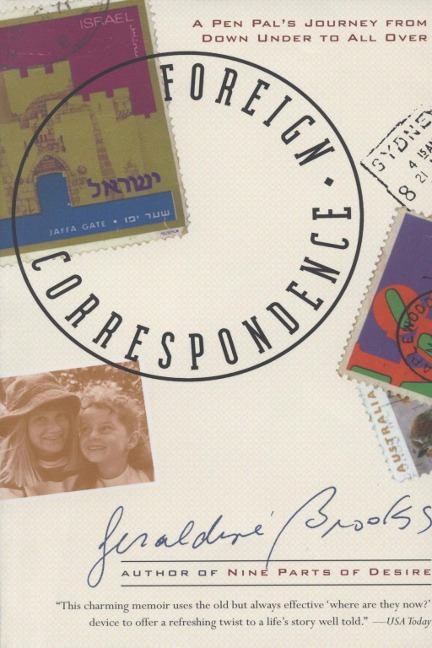 A Pen Pal's Journey from Down Under to All Over

As a young girl in a working-class neighborhood of Sydney, Australia, Geraldine Brooks   longed to discover the places where history happens and culture comes from, so she   enlisted pen pals who offered her a window on adolescence in the Middle East, Europe,   and America. Twenty years later Brooks, an award-winning foreign correspondent, embarked   on a human treasure hunt to find her pen friends. She found men and women whose lives   had been shaped by war and hatred, by fame and notoriety, and by the ravages of mental   illness. Intimate, moving, and often humorous, Foreign Correspondence speaks to the   unquiet heart of every girl who has ever yearned to become a woman of the world.

Geraldine Brooks is the author of four novels, the Pulitzer Prize-winning Marchand the international bestsellers Caleb's Crossing, People of the Book, and Year of Wonders. She has also written the acclaimed nonfiction works Nine Parts of Desire and Foreign Correspondence. Her most recent novel, Caleb's Crossing, was the winner of the New England Book Award for Fiction and the Christianity TodayBook Award, and was a finalist for the Langum Prize in American Historical Fiction. Born and raised in Australia, she lives on Martha's Vineyard with her husband, the author Tony Horwitz.