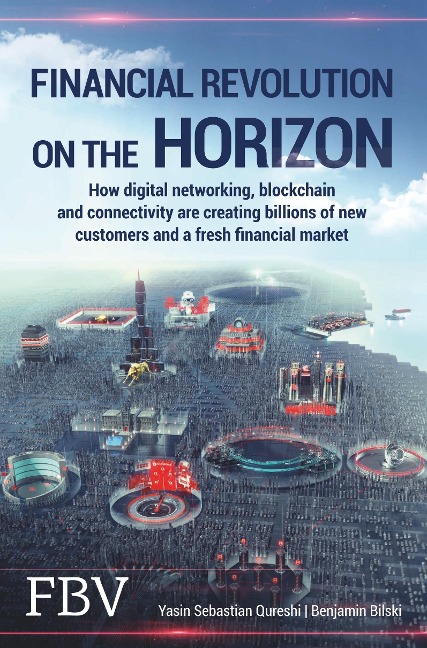 Financial Revolution on the Horizon

Excessive costs, cumbersome processes, disincentives and what's more: all manner of isolated, self-serving sector solutions. A financial system with methods and processes from yesteryear shapes our banking. Indeed, our entire life and society-especially the state and administrative bodies-are based on such archaic processes. In addition, billions of people worldwide are excluded from the financial system as they are not even in possession of a bank account. Banks, currencies, payment methods and administrative transactions are, on the whole, not sustainable. They are responding neither to the needs of many customers/citizens, nor to the challenges of the times. Politically and socially, we are drifting about aimlessly, lacking control and efficiency.

Financial expert and entrepreneur Yasin Sebastian Qureshi-at age 29 the youngest person ever licensed to run a European bank-describes groundbreaking solutions that have long been in existence: digitalisation and its offspring the Internet, mobile phones and blockchain which are actively determining progressive developments, and whose most radical embodiment so far has been the rise of Bitcoin an other cryptocurrencies.

The revolutionary thing about blockchain, however, is not the mere payment process, but the underlying technology, the more efficient processes and, in particular, its decentralised character and interconnectedness. Together with Benjamin Bilski (Forbes "30 under 30"), Qureshi outlines the future of finance and all the relevant administrative processes in business and state, even entire states, on the basis of such blockchains.

The authors also dissect the history, meaning and nature of money; it has always been in a state of transformation-but now is in one of complete upheaval. The two also shed light on the social, economic and political consequences of these mutations. But what will happen if everything is organised into blockchains? The answer is certainly not one that should be feared. The new foundations of our daily and working existence are unleashing forces that have so far been pointlessly and inefficiently tied up in technocratic working environments. Following on from, and leaving behind, the Industrial Revolution, a new revolution is now on the rise. Starting in the financial system, it will turn everything there on its head and qucikly expand to other areas. Blockchain is restoring time and its potential to all us-which we can use for other, better and more creative things. Cash, however, is likely to disappear in the medium term-as well as banks, at least as we know them today.

Yasin Sebastian Qureshi is a banking and finance professional who has been in the business for a long time. He was the youngest person in Europe ever to have obtained a banking license, and subsequently founded and ran his own investment bank successfully going public in 2007. Yasin is an investor in technology start-ups and film and also co-founded the Global Citizen Foundation. He has a strong focus on finance, brokerage, and technology. Indeed, he is a hands-on, passionate entrepreneur aiming to seriously disrupt current financial business structures.