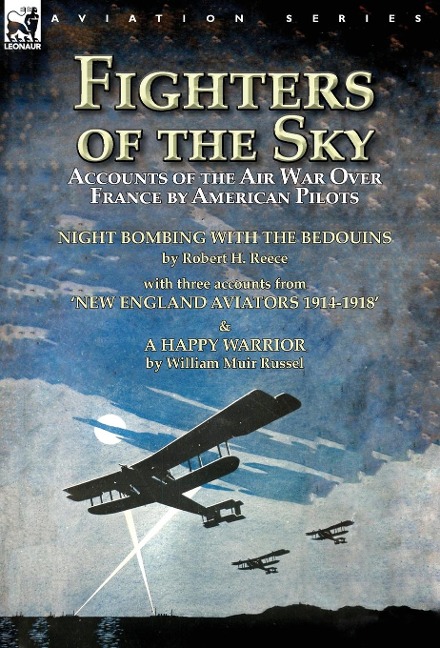 Fighters of the Sky

Accounts of the Air War over France by American Pilots-Night Bombing with the Bedouins by Robert H. Reece, With Three Accounts from 'New England Aviators 1914-1918' & A Happy Warrior by William Muir Russel

Life and death in the clouds above the Western Front

This unique Leonaur edition brings together for the first time several associated accounts of interest to all students of aerial warfare during the First World War. The first concerns the activities of 'the Bedouin Squadron', a unit comprised of aviators brought together from all over the globe who joined the RFC. The squadron became active in September, 1917 and flew the large Handley-Page bombers. Accounts of bomber squadrons are comparatively rare compared with those of 'scout' squadrons so this narrative is particularly interesting. This riveting account is accompanied in this unique Leonaur edition by anecdotes of air battle concerning one of the squadron's American pilots, Sam Mandell. The final work in this book concerns the wartime exploits of William Muir Russel who was a first lieutenant in the American Air Service flying with the 95th Aero Squadron of the First Pursuit Group.

Leonaur editions are newly typeset and are not facsimiles; each title is available in softcover and hardback with dustjacket.