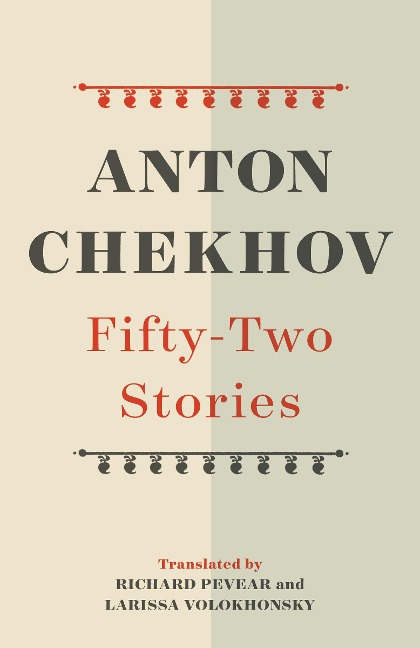 From the celebrated, award-winning translators of Anna Karenina and The Brothers Karamazov: a lavish volume of stories by one of the most influential short fiction writers of all time

Chekhov's genius left an indelible impact on every literary form in which he wrote, but none more so than short fiction. Now, renowned translators and longtime house authors Richard Pevear and Larissa Volokhonsky give us their peerless renderings of fifty-two Chekhov stories. These stories, which span the full arc of his career, reveal the extraordinary variety and unexpectedness of his work, from the farcically comic to the darkly complex, showing that there is no one type of "Chekhov story." They are populated by a remarkable range of characters who come from all parts of Russia and all walks of life, including landowners, peasants, soldiers, farmers, teachers, students, hunters, shepherds, mistresses, wives, and children. Taken together, they demonstrate how Chekhov democratized the form.

Included in this volume are tales translated into English for the first time, including "Reading" and "An Educated Blockhead." Early stories such as "Joy," "Anguish," and "A Little Joke" sit alongside such later works as "The Siren," "Big Volodya and Little Volodya," "In a Country House," and "About Love." In its range and narrative artistry, and in its perceptive probing of the human condition, this collection promises profound delight.

Anton Chekhov was born in 1860 in southern Russia. The grandson of a serf, he became a physician, paying for his education by selling satirical and humorous sketches to the newspapers. He soon turned to serious short stories, winning the Pushkin Prize in 1887, and went on to write plays, including Uncle Vanya, The Seagull, Three Sisters, and The Cherry Orchard, and novellas, including The Steppe and The Duel. He died of tuberculosis in 1904.

Together, RICHARD PEVEAR and LARISSA VOLOKHONSKY have translated works by Chekhov, Dostoevsky, Tolstoy, Gogol, Bulgakov, Leskov, and Pasternak. They were twice awarded the PEN/Book-of-the-Month Club Translation Prize (for Dostoevsky's The Brothers Karamazov and Tolstoy's Anna Karenina). They are married and live in France.