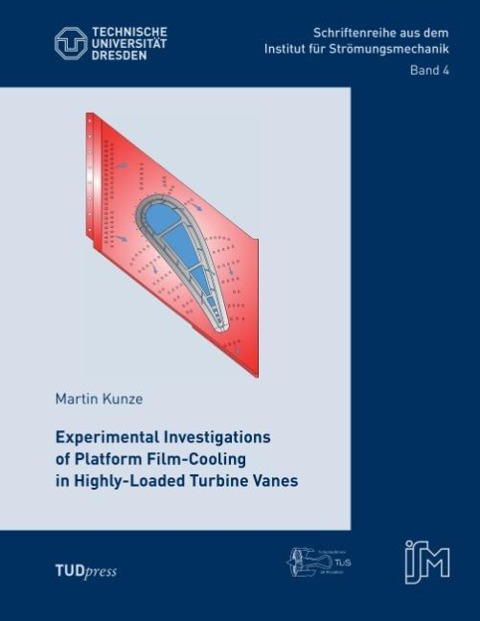 In modern gas turbines, the airfoil platforms in the high-pressure turbine are subject to extreme aerodynamic and thermal loads. Hence, these surfaces are extensively cooled using film-cooling as key technology. The coolant is injected through small holes into the wall boundary layer which is of three-dimensional and highly-turbulent character. It is further influenced by a set of secondary flow vortices which are driven by the lateral pressure gradient and alter with the gas turbine's operating point. Hence, changed vane loading during start-up or in part load directly affect the vortex strength and thus the platform cooling.
Accurate prediction of the film-cooling behavior under the influence of the secondary flow with the use of existing analytic functions is quite difficult. Thus, experimental investigations are required to fill the gap and gain detailed insight into the complex coolant-hot gas interaction. The present work focuses on the coolant behavior on a heavily film-cooled endwall of a highly-loaded turbine vane cascade. The secondary flow is significantly enhanced by varying airfoil incidence, hence it's turning. For measuring wall temperatures, a non-intrusive, temperature-sensitive paint technique (TSP) was developed and successfully validated on flat-plate film-cooling tests. A combination of CFD-simulations and FE-thermal analysis is used to assess the adiabatic film effectiveness in streamwise direction. With that, an experimental data base with variation of airfoil loading is provided for developing 1D-correlations that can be integrated into the gas turbine's design system.