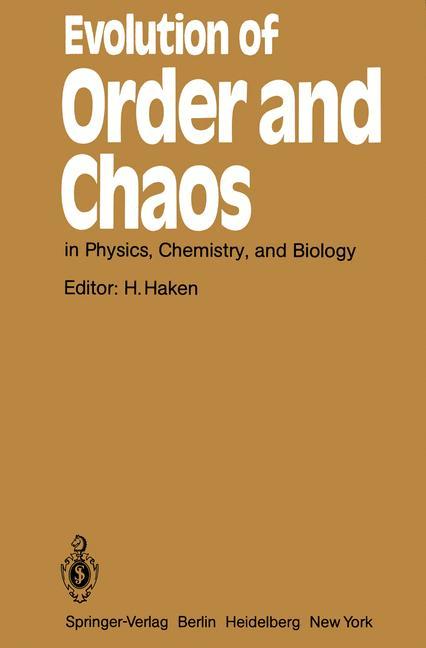 Evolution of Order and Chaos

in Physics, Chemistry, and Biology Proceedings of the International Symposium on Synergetics at Schloß Elmau, Bavaria, April 26-May 1, 1982

These proceedings contain the invited lectures presented at the International Sym­ posium on Synergetics at Schloss Elmau in April, 1982. This symposium marked the th 10 anniversary of symposia on synergetics, the first of which was held at Schloss Elmau in 1972. As is now weIl known, these symposia are devoted to the study of the formation of structures in physical systems far from thermal equilibrium, as weIl as in nonphysical systems such as those in biology and sociology. While the first proceedings were published by Teubner Publishing Company in 1973 and the second by North Holland Publishing Company in 1974, the subsequent proceed­ ings have been published in the Springer Series in Synergetics. I believe that these proceedings give a quite faithful picture of the developments in this new interdisciplinary field over the past decade. As H.J. Queisser recently noted, the prefix "non", which is used quite frequent­ ly in modern scientific literature in words such as "nonequilibrium", "nonlinear", etc., indicates a new development in scientific thinking. Indeed, this new develop­ ment was anticipated and given a framework in the introduction of "synergetics" more than a decade ago.