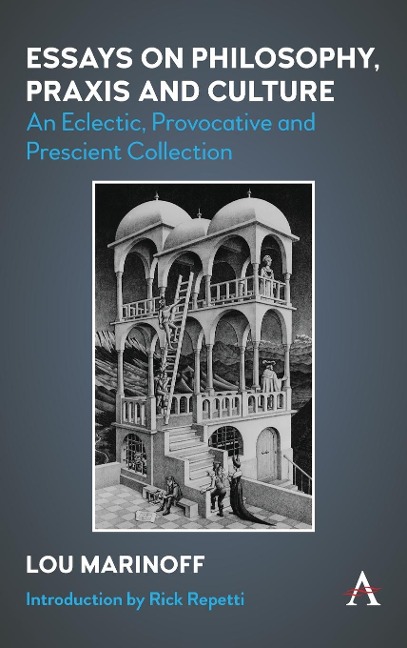 Essays on Philosophy, Praxis and Culture

An Eclectic, Provocative and Prescient Collection

This collection provides a panoramic view of practical philosophical insight, ranging across a spectrum of humanistic themes. These essays cast light on our perennially imperfect human condition. They are written from the complementary standpoints of a classical liberal scholar with one foot planted in the academy, and of a peripatetic pioneer whom The New York Times called the world's most successful marketer of philosophical counseling. These writings therefore span a space in which theory and praxis are mutually informative and seamlessly collaborative.
The collection ranges over Alfred Korzybski's general semantics; Thomas Mann's prognosis for Western civilization; Hume's moral skepticism applied to globalization; Jungian synchronicity and encounters with Irvin Yalom; convergence of Nietzsche, neuroscience and Buddhism; Ayn Rand's prophetic apocalypse; philosophical practice as Dadaist activism; humanities-based therapies as remedies for culturally induced illnesses; dangers and detriments of overdigitalized and hyper-virtualized lifestyles and learning methods; forces that both favor and impede the re-emergence of philosophy from inactive academic entombment to pro-active modes of personal guidance, social influence, consumer advocacy, and political engagement. A unifying claim of this anthology is the cautionary tale that humanity's recurrent and conflict-ridden predicaments are only exacerbated by myopic analyses, toxic ideologies, and expedient prescriptions. While philosophy is scarcely a panacea for human afflictions, its proper exercise illuminates our understanding of them, thereby suggesting better as opposed to worse ways forward.
Overall, the thrust of this collection can be viewed as a realization of John Dewey's forthright vision, expressed in 1917: Philosophy recovers itself when it ceases to be a device for dealing with the problems of philosophers and becomes a method, cultivated by philosophers, for dealing with the problems of men. Indeed, these essays deal with problems of humanity writ large. They also constitute a compelling response to Mortimer Adler's clarion call in 1965, that philosophy must cease to be an activity conducted by moles, each burrowing in its own hole, and become a public and co-operative enterprise. As these essays reveal, Marinoff has accomplished Adler's mission, transforming and returning philosophy to the agora, which in contemporary parlance amounts to the global village. That his popular books on philosophy for everyday life have sold millions of copies in dozens of languages has distracted some--perhaps too many--philosophers from exploring what he has written for a philosophical audience itself. This book helps remedy that distraction.