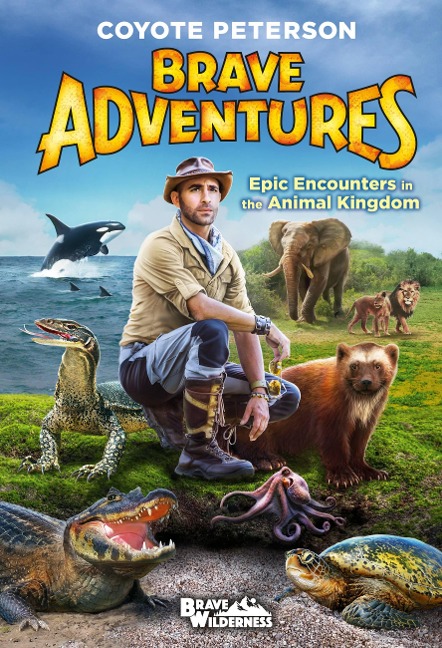 p.p1 {margin: 0.0px 0.0px 0.0px 0.0px; font: 15.0px Calibri; -webkit-text-stroke: #000000} span.s1 {font-kerning: none}
Wildlife expert and YouTube phenomenon, Coyote Peterson, is back with the sequel to the bestselling Brave Adventures: Wild Animals in a Wild World. Once again, Coyote and his crew voyage to new environments and encounter an even more eclectic ensemble of the planets' animals. From a slimy octopus to elusive tree climbing lizards to nomadic wolverines--this book promises to be another fast-paced, wild experience. Coyote will take readers for a hike through a snake infested island, kayak the ocean to discover a migrating pod of killer whales, and track a pride of lions across the South African savanna! You don't want to miss these never-before-told brave adventures, guaranteed to be a hit with Coyote's 13 million fans as well as animal lovers around the world! Includes over one hundred hand-drawn, black-and-white illustrations throughout.

p.p1 {margin: 0.0px 0.0px 0.0px 0.0px; font: 10.0px Times} Emmy Award-winning host of YouTube's Brave Wilderness Coyote Peterson spent most of his childhood outdoors catching animals before discovering his second passion in his love for movies and television. While studying video production at The Ohio State University he met his future business partner, Mark Vins. With Coyote's intense passion for wildlife and their shared love of storytelling, they were inspired to combine the two mediums and created Brave Wilderness with the goal of making animal education exciting for the next generation of outdoor explorers and animal enthusiasts.

Fizzlebert Stump: The Boy Who Did P.E. in his P...