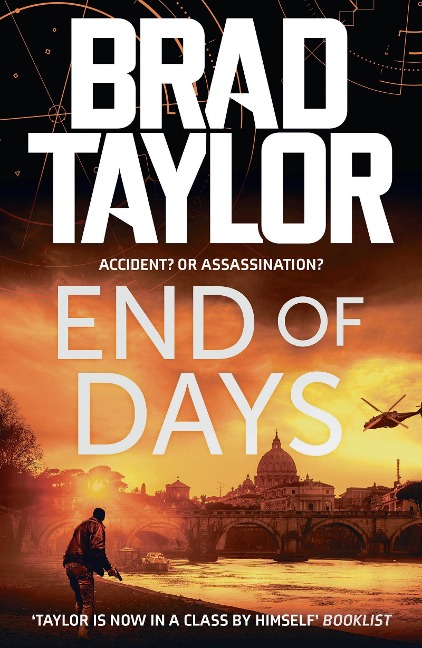 The Taskforce and Mossad join forces against a fanatical organisation in this action-fuelled thriller from New York Times bestseller and former special forces officer, Brad Taylor.

When the former head of Israeli intelligence is killed on a paragliding trip, it's the latest in a series of 'accidental' deaths befalling key members of the American and Israeli governments. Mossad bring in terrorist hunters Aaron and Shoshana to investigate - and they know just who to call.

Taskforce operator Pike Logan has been out of action for too long, so he jumps at the chance to take on the mission. An Iranian-funded militia group has claimed responsibility for the deaths. But something doesn't add up. Logan will have to wade deep into the complex religious and political currents of the region - and his findings could have disastrous consequences for the entire world...
Reviews for End of Days:
'End of Days is a stunning triumph' Providence Journal

'Taylor [is] one of today's finest storytellers' TheRealBookSpy

Brad Taylor is the New York Times bestselling author of the Taskforce series, with nearly 3 million copies sold. He channels his experience as a Special Forces Commander in the US army into his thrillers. In the 1st Special Forces Operational Detachment-Delta, Taylor commanded multiple troops, a squadron and conducted operations in classified locations. He lives in Charleston, South Carolina, with his wife and two daughters.