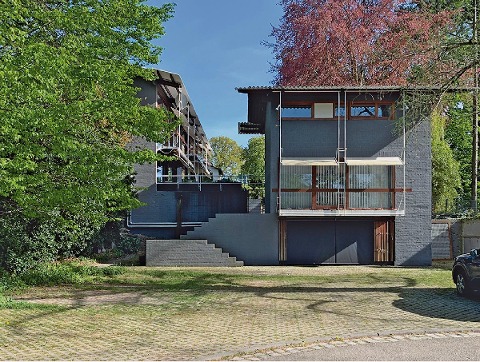 Even though he had made a name for himself in the 1930s with his Berlin single-family homes, Eiermann later on found it difficult to accept commissions for this building type when, during the period of the »economic miracle«, he was approached by numerous people interested to get a design by him. Only the Hardenberg House in Baden-Baden satisfied him, but above all his own house, which he also built in Baden-Baden in 1959-62. This house in particular, built after his success with the German Pavilion at the 1958 Brussels World's Fair and at the same time as the Berlin Gedächtniskirche and the German Embassy in Washington, was to become one of the main works of his post-war creative output. As a builder in his own right, he was able here to uncompromisingly realize his ideal image of living for himself and his family in architecture. Eiermann himself tried to explain the house, which only crystallized in a longer planning genesis,
primarily from the functional side: main house and annexe, the latter for garage, studio and guest apartment, the elongated main house in bulkhead construction under a flat sloping roof. In fact, the house is convincing in its sophisticated functionality. But it does not stop there. The complex group of buildings on a steep hillside site with its stagelike terraces, the staged interplay of views from the inside to the outside and, at night, also from the outside to the inside, is an extremely artificial structure even from its basic disposition. The Eiermann typical façade, with its exterior walkway and white
linkage as well as the corrugated Eternit roof provide a ponderous contrast. Together with echoes of traditional Japanese houses and gardens, but above all with the adoption of motifs from sailing-ship building give this house an unmistakable character. Since 2020, the house has new owners, on whose behalf the Stuttgart architects »now here« (Henning Volpp and Karl Amann) have undertaken an extremely careful renovation.
Eiermann's estate, which is kept at saai, the Archive for Architecture and Engineering at the Karlsruhe Institute of Technology (KIT), provided the historical drawings and photographs for this volume.