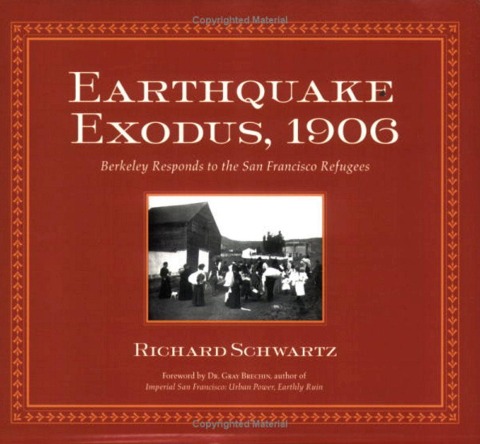 Earthquake Exodus, 1906 tells the story of the ten-week relief effort in the East Bay after the 1906 San Francisco earthquake and fire. Within hours of the earthquake, the people of Berkeley began to organize a citizens' committee, knowing that terrified masses of stricken refuges would pour into their town within hours. By revisiting both their challenges-smallpox, fires, and keeping public order-and acts of grace, such as taking in the homeless, setting up temporary camps, and dispensing food, Richard Schwartz illuminates a nearly forgotten episode in Bay Area history. Containing many breathtaking photos and illustrations not seen for nearly one hundred years, this new visual history offers up singularly human details of one of the nation's most infamous disasters.

Richard Schwartz is a historian and the author of Eccentrics, Heroes, and Cutthroats of Old Berkeley; Earthquake Exodus, 1906; Berkeley 1900; and The Circle of Stones. An outdoor enthusiast and animal lover, he worked on a Pennsylvania Dutch farm before heading west to find higher mountains. He now lives in Berkeley, California, where he works as a building contractor and documents early Native American sites in the Bay Area.