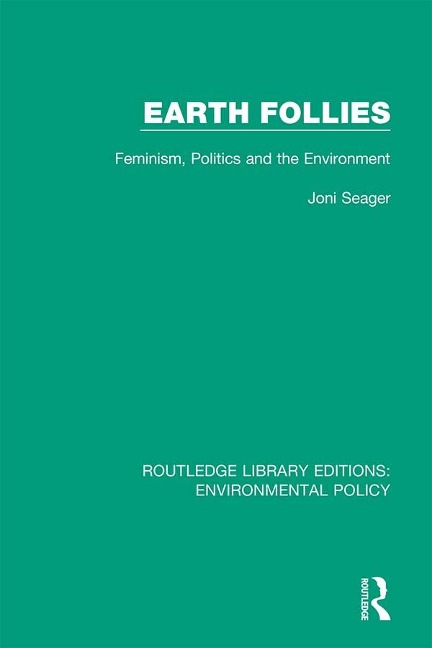 Feminism, Politics and the Environment

First published in 1993. The question of 'agency' is essential to our understanding of environmental problems - who is responsible, and why? Threats such as ozone depletion, global warming and overconsumption are all precipitated by the powerful institutions which shape modern life - institutions which are overwhelmingly controlled by men and dominated by masculine presumptions.

Joni Seager argues that the gender bias inherent in western culture is inextricably linked to our environmental crisis. She analyses the traditional institutes of power - governments, the military and transnational corporations - and also takes a critical look at the equally patriarchal environmental establishment, comparing the work of the official environmental movement, grounded in masculine thought, with the smaller-scale, direct actions taken by women driven to protect their homes and communities.

Earth Follies represents an incisive and utterly convincing feminist critique of our environmental crises, and offers radical and productive priorities for the environmental agenda.

Joni Seager, Professor of Global Studies at Bentley University in Boston, is a feminist geographer and global policy expert. The author of more than a dozen books, she is a frequent consultant to the UN and governments around the world on gender and environmental policy and gender statistics.

List of Illustrations and Tables; Acknowledgements; Introduction: What's the Problem Here?; 1. Up in Arms Against the Environment: The Military 2. Business as Usual 3. On the Coattails of Men in Government 4. The Ecology Establishment 5. The Eco-Fringe: Deep Ecology and Ecofeminism 6. Hysterical Housewives, Treehuggers, and Other Mad Women; Conclusion; Notes; Selected Bibliography; Index

The Art of Natural Cleaning

The Drowning of Arthur Braxton

Boston Campus - Only for You