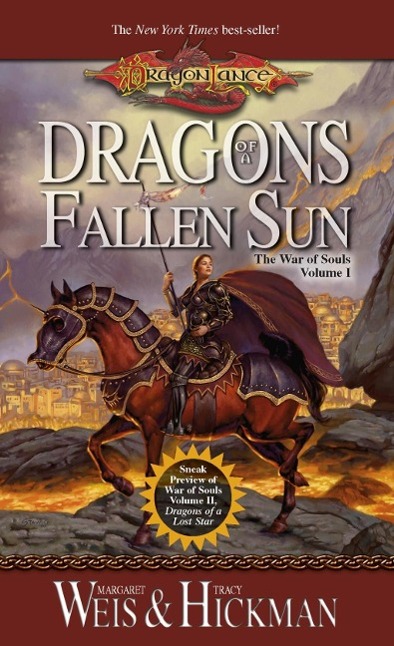 Dragons of a Fallen Sun

A new age dawns-and a war for the heart and soul of Krynn begins-in this first book in the War of Souls trilogy, from the creators of the Dragonlance universe

Forty years have passed since the devastating Chaos War, when the gods departed Krynn and the Fourth Age came to an end. Cruel and powerful dragons have seized control of Ansalon, dividing the continent among them and demanding tribute from the people they have enslaved.

Heroes of the past have gone to their well-deserved rest, forever revered for their bravery during the Chaos War and the War of the Lance. Now, new heroes rise to take their place, prepared to continue the battle against evil. War awaits them-a war more terrible than any on Krynn have known.

Change-for good or for ill-comes to the world. A violent magical storm sweeps over Ansalon, bringing blood and fire, death and destruction. Out of the tumult rises a strange, mystic young woman, whose destiny is bound up with that of Krynn. She alone knows the truth about the future and its strange, inextricable ties to a terrifying mystery in Krynn's past.

Margaret Weis and Tracy Hickman published their first novel in the Dragonlance Chronicles, Dragons of Autumn Twilight, in 1984. Over twenty years later, they are going strong as partners and have published over a hundred books, including over thirty novels, collections of short stories, role-playing games, and other game products alone or with other co-authors. Hickman is also the inspiration for the "Tracy Hickman Presents" line of Dragonlance novels for Wizards of the Coast. Weis is the President of Sovereign Press, which publishes Dragonlance game material as well as many other game products.

Dragons of a Vanished Moon

Dragons of a Lost Star