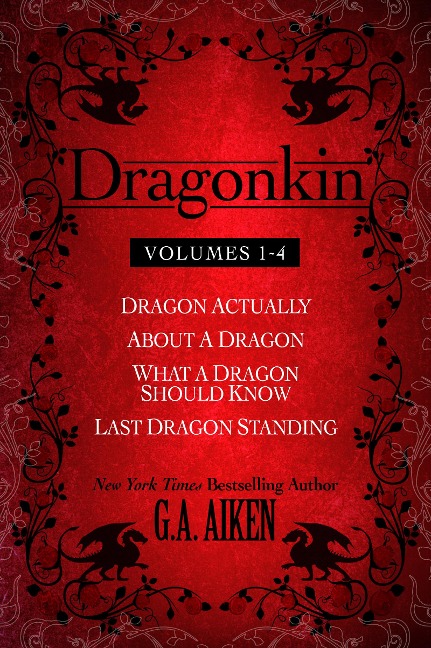 Dragon Actually
Annwyl has a knack for decapitating legions of her ruthless brother's soldiers without pausing for breath. But just once it would be nice to be able to really talk to a man, the way she can talk to Fearghus the Destroyer. It's just too bad Fearghus is a dragon . . . isn't it?

About a Dragon
For Nolwenn witch Talaith, a bad day begins with being dragged from bed by an angry mob intent on her crispy end and culminates in rescue by-wait for it-a silver-maned dragon. With a human form to die for, and who is utterly spellbound by Nolwenn's magic . . .

What a Dragon Should Know
Gwenvael the Handsome certainly has a high opinion of himself. Which is why he's been called upon to broker an alliance with the one the Northlanders call The Beast. It turns out the Beast, a.k.a. Dagmar Reinholdt, is a woman with a heart of ice only a dragon's fire might melt . . .

Last Dragon Standing
Keita is a charming, soft-spoken dragoness bred from the most powerful of royal bloodlines. It's a disguise that allows her to keep all suitors at tail's length. Until Ragnar the Cunning, a handsome barbarian warlord and warrior mage from the desolate Northlands dismisses her as vapid, useless and, to her great annoyance, rather stupid! WTF?!

A Tale of Two Dragons
Braith of the Darkness likes going through life unnoticed. Not an easy task for a She-dragon of royal descent. But the evil plots of her father are turning her quiet, boring life upside down. Except this time she won't have to fight alone. Not when the warrior dragon of her dreams-one Addolgar the Cheerful-is willing to risk everything to save her neck.

Praise for the Dragon Kin Series

G.A. Aiken is the New York Times and USA Today bestselling author of the Dragon Kin Series and the Scarred Earth Saga. When she's not writing about sexy dragons and feminist blacksmiths, she's writing about hot wolf, lion, tiger, and other fang-filled predators as Shelly Laurenston, the acclaimed and bestselling author of the Pride series, the Call of Crows, and the Honey Badger Chronicles. Originally from Long Island, she now lives on the West Coast and spends most of her time writing and making sure her rescued Pitbull doesn't love everyone into a coma. Please visit her online at www.GAAiken.com.