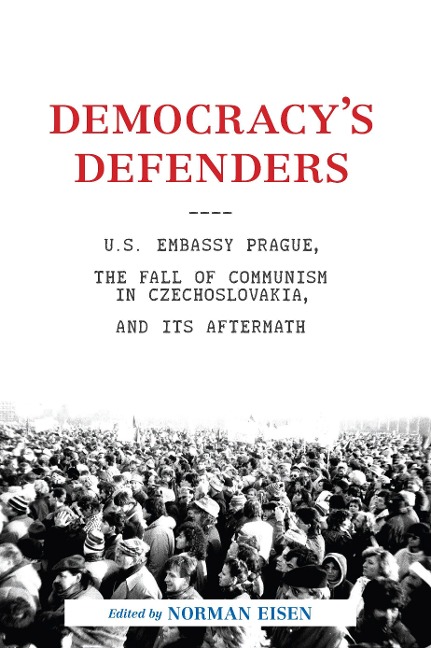 Democracy's Defenders: U.S. Embassy Prague, the Fall of Communism in Czechoslovakia, and Its Aftermath

Democracy's Defenders offers a behind-thescenes account of the little-known role played by the U.S. embassy in Prague in ending Communism in what was then Czechoslovakia. Featuring fifty-two newly declassified diplomatic cables, the book shows how the staff of the embassy, which was led by U.S. Ambassador Shirley Temple Black, worked with dissident groups and negotiated with the Communist government during a key period of the 1989 Velvet Revolution that freed Czechoslovakia from Communist rule.

In the vivid reporting of these cables, Black and other members of the U.S. diplomatic corps in Prague described student demonstrations and their meetings with anti-government activists. The embassy also worked to forestall a violent crackdown by the Communist regime during its final months in power.

Edited by Norman Eisen, who served as
U.S. ambassador to the Czech Republic from 2011 to 2014, Democracy's Defenders is an important and unique contribution to our understanding of U.S. diplomatic history, the Cold War era, and American promotion of democracy overseas. In an introductory essay, Eisen places the diplomatic cables in context and analyzes their main themes. An afterword written by Eisen, along with Czech historian Dr. MikuláS PeSta and Brookings Institution researcher Kelsey Landau, explains how the seeds of democracy that the United States helped plant have continued to grow despite many stresses, including the 1992-93 breakup of Czechoslovakia into the separate nations of the Czech Republic and the Slovak Republic. The authors trace a line from U.S. efforts to promote democracy and economic liberalization after the Velvet Revolution to the contemporary situations in both countries,
addressing both democratic challenges and opportunities.

Norman Eisen, editor and contributor, is a senior fellow at the Brookings Institution. He served as U.S. ambassador to the Czech Republic from 2011 to 2014 and as White House "ethics czar" from 2009 to 2011. He
is the author of The Last Palace: Europe's Turbulent Century in Five Lives and One Legendary House.

Introduction: U.S. Diplomacy in Czechoslovakia at the End of the Cold War