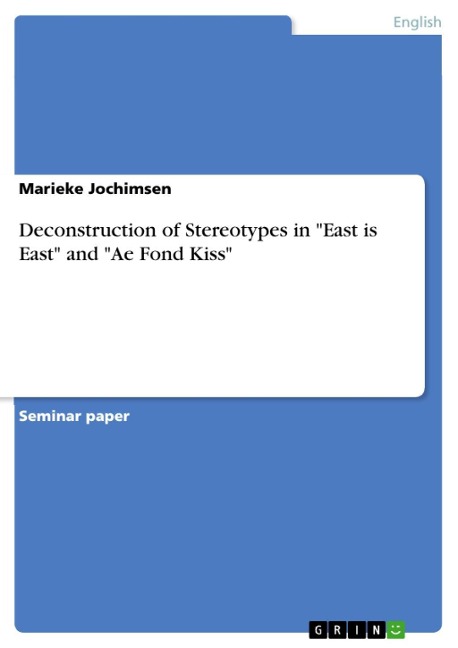 Deconstruction of Stereotypes in "East is East" and "Ae Fond Kiss"

Seminar paper from the year 2008 in the subject English Language and Literature Studies - Literature, grade: 2,0, University of Münster (Englisches Seminar), course: Asian British Culture on Film and TV , language: English, abstract: "Oh East is East and West is West, and never the twain shall meet,
Till Earth and Sky stand presently at God's great Judgement Seat;
But there is neither East nor West, Border, nor Breed, nor Birth,
When two strong men stand face to face, though they come
from the end of the earth!"1

Stereotypes exist everywhere around us and are a natural means to be able to talk about the world. However, they might result in prejudices and discrimination. The stereotypical division into "East" and "West" is evidently a too simplistic one, since there is nothing matching these expressions in the world.
This research paper aims to reveal methods of postcolonialism to overcome binary oppositions like "East" and the "West", which have been constructed during colonial times through western conception and representation of the "East". After briefly showing constitutive and simplifying characteristics of language in general, an introduction to Eward Said's work Orientalism is given as an example of the creation of the 'otherness' of a specific group. Orientalism focuses on how and to which extend the Orient or the East has been created in western notions. By this means the necessity for postcolonial discourse is highlighted. This so-called rewriting of the past can also be observed in the Asian British diaspora. The movies East is East and Ae fond Kiss can be interpreted as an example for postcolonial discourse and an attempt to break national or ethnic stereotypes and binary juxtapositions.