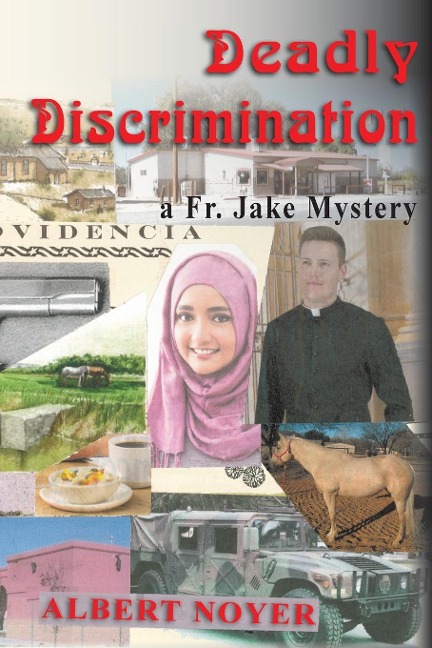 In Providencia, Carlotta sells her store to a Muslim, Bahir Ahmed. Fr. Jake arranges to meet Ahmed and finds out he is from Albuquerque, married with a wife and two children, and his father is Imam at the Islamic Center in town. At Mass, Fr. Jake asks his parishioners to be tolerant to the new store owners, as Jesus was to strangers. Fr. Jake helps Cynthia Plow organize a community meeting to teach residents more about the Islamic religion, and the Ahmeds attend to answer questions. After the meeting, both Fr. Jake and Cynthia receive threatening mail.
Milton Pointer, a white supremacist in another town, reads about the sale and devises an elaborate scheme to torch the store by smashing a Hummer "borrowed" from the Fort into the gas pumps. Sherriff Griego, who is guarding the store, shoots Pointer dead through the windshield and arrests his accomplice, who must stand trial.
Fr. Jake gets a surprise visit from Archbishop Benisek, who tells Fr. Jake that the Detroit Prelate wants him back in Michigan to run his old parish. A young priest, Father Luis Montoya, has come along to replace Fr. Jake in Providencia. Juan Herrera and Sonia want to be married by Fr. Jake before she takes her new job as a drug enforcement agent in Washington D.C.. Will this happen? Will Father Montoya be accepted?

An artist and writer, Albert Noyer was born in Switzerland but raised in Detroit, Michigan. After Army service, he pursued degrees in art, art education, and teaching humanities, at Wayne State University. He subsequently worked as a commercial artist, taught art in a Detroit Public Schools technical/vocational program, and art history at a private college. Noyer retired to New Mexico with his wife, Jennifer, where he exhibits watercolor paintings and woodcut prints in galleries and regional exhibits. His artwork has been featured in New Mexico Magazine and the Mature Life in New Mexico supplement in Sunday's Albuquerque Journal. He is a member of the New Mexico Watercolor Society, SouthWest Writers, Sisters in Crime, Croak & Dagger, and New Mexico Veteran's Art.
Published by Plain View Press, his contemporary Fr. Jake Mysteries, The Ghosts of Glorieta; One for the Money, Two for the Sluice; and Deadly Discrimination are set in Michigan and New Mexico. The two volume Alberix the Celt, also published by Plain View Press, is a retelling of Julius Caesar's conquest of Gaul from the viewpoint of a Celtic youth caught up in the Romanization of the country now called France. Noyer first published A.D. fifth century novels, the Getorius and Arcadia mysteries, set in an era seen as critical in creating the political, religious, and cultural institutions that survive into modern times.