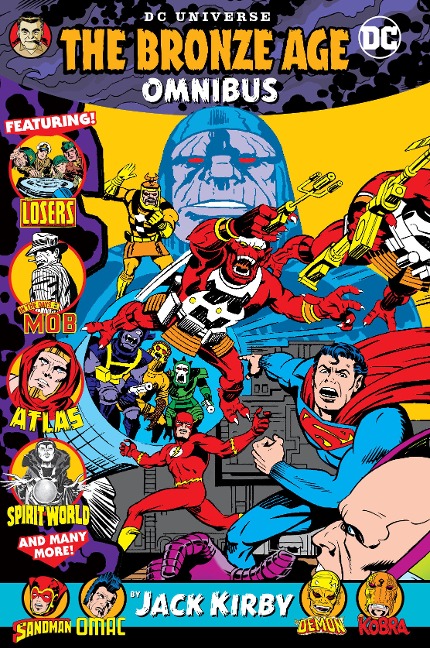 For the first time, DC collects the 1970s and 1980s short-run comics by prolific writer/artist Jack Kirby in one massive hardcover featuring the Demon, OMAC, Super Powers, The Losers and many more.

In the world of comic books, few writers or artists loom as large as the legendary Jack Kirby. By the early 1970s, he'd already spent 30 pioneering years innovating and exploring the comics art form.

After a groundbreaking decade at Marvel, Kirby returned to DC Comics and immediately began crafting some of his best-loved works, most notably his cosmic epic, the Fourth World saga. For anyone but Jack Kirby, this colossal masterpiece would have been contribution enough to the DC canon, but "the King" spent that same period revitalizing all corners of the DC Universe, from superhero antics to experimental horror to wartime realism, and creating such unforgettable characters as Etrigan the Demon and OMAC.

This volume pulls together more than 1,400 pages of these "other" Kirby comics from the 1970s and 1980s, featuring the Demon, the Sandman, the Losers and more!

Jack "King" Kirby's comics career began in 1937 and continued for nearly six decades. With partner Joe Simon, Kirby first made his mark in comics in the 1940s by drawing and/or creating numerous features for DC Comics including Sandman, The Newsboy Legion and Manhunter, and for Marvel including Captain America, The Young Allies and the Kid Commandoes. As the most valued team in comics, Simon and Kirby went on to create titles and concepts including Fighting America, Boys' Ranch and the creation of the romance comics genre.  In 1961, the first issue of Marvel's Fantastic Four cemented Kirby's reputation as comics' preeminent creator, and a slew of famous titles followed that elevated him to legendary status, including Incredible Hulk, Avengers and X-Men. Kirby returned to DC in 1971 with his classic Fourth World Trilogy, which was followed by The Demon and Kamandi.  Kirby continued working and innovating in comics until his death in 1994.